Construction of the Divided Bar Apparatus

The divided bar apparatus was designed and built to provide an accurate, rapid, and inexpensive way to measure thermal conductivity. The machine itself was an Arduino microcontroller, which controlled heaters and measured temperature values via thermistors, and displayed this information in real time to a computer via the Instrumentino GUI. Figure 1 displays the different components of the divided bar apparatus and their relationships. 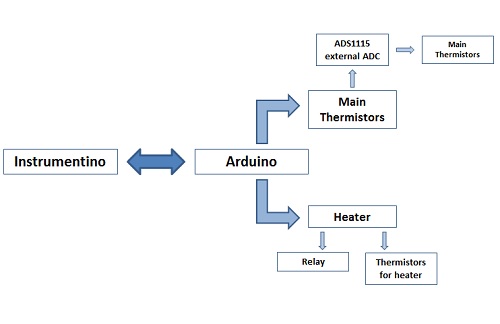 The main thermistors compared the temperature changes across the rock sample to those from reference disks. Polycarbonate reference disks were used, based on the success of a divided bar by McGuinness et al. (2014). Figure 2 shows the completed divided bar in use and Figure 3 shows the electrical components.

Figure 3: The electrical components of the divided bar: (A) the relay which controlled the heaters, (B) the Arduino Mega 2560, (C) the thermistors attached to the voltage divider circuits via screw terminals, (D) the external ADC, and (E) the Arduino Uno which provided power for the relays.

Arduino code for micro wind turbines placed on a car