In order to verify the kinematics equations, a physical LDR was constructed. The prismatic joints were created from threaded sliders on lead screws, actuated by stepper motors.
Ball and socket joints were used for the spherical joints. Kinematics calculations and motor control are performed with an Arduino Uno, which receives position commands via USB cable from a serial messenger, in this case a laptop computer. This position command was then converted to a linear distance for each slider, which in turn was converted to a number of ticks for each stepper to rotate. Positional data is stored on the Arduino EEPROM, which retains the information even when power is disconnected. Contact switches were placed along the slider track at known locations, allowing the robot to be reset to a known position should the positional data get corrupted or lost. Figure 1 shows the constructed LDR. 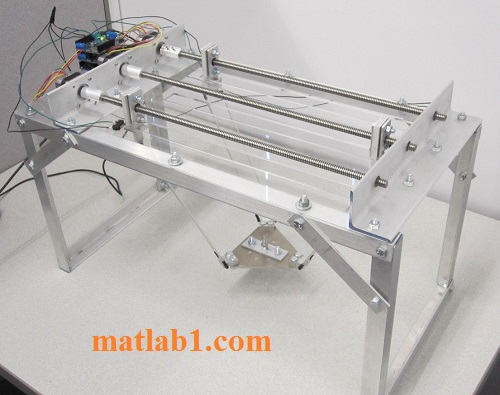 1 review for Arduino and MATLAB code for Linear Delta Robot