This document details the efforts made to design and develop a prototype movement assistance system for extravehicular spacesuit gloves. The primary reason for this undertaking stems from the continued impedance to movement of current spacesuit concepts. This impedance stems from the core concept of maintaining a pressurized atmosphere around a human being to enable respiration and keep bodily fluids in a liquid state. 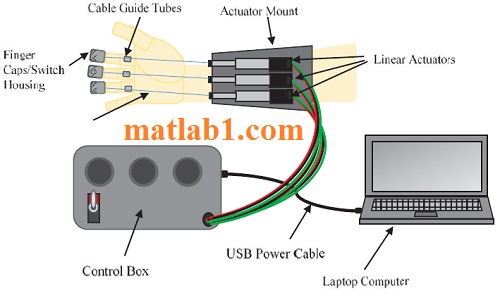 Diagrams of the glove box apparatus and the prototype assistance system

The design and manufacture of EVA gloves has greatly improved over the decades, integrating new technologies and pattern concepts that greatly improve the garment’s fit. However, when the spacesuit is pressurized it balloons outward and the elasticity of the bladder creates resistance to deformation. Astronauts operating in EVA suits have to constantly work against this force to perform tasks which cause the muscles to fatigue, especially after six to eight hours of activity. One area this is particularly significant is in the glove due to the high degree of mobility the garment must try and facilitate. In an attempt to mitigate this resistance an electro-mechanical assistance system was developed and tested utilizing techniques and technologies noted from previous prototypes. The development of the system is detailed in the document and overall it the undertaking was a success with each of the project objectives being met. The effect of the assistance system is best displayed in the qualitative data obtained after each test with three of the four subjects reporting noticeable reduction in muscular fatigue. The quantitative time data unfortunately is not able to support this conclusion because inconsistences prevent an overarching trend from being observed. There was one subject that displayed a significant increase in activity time when utilizing the assistance system, however the other three experienced difficulties when operating the system which caused significant portions of the allotted experiment time to be lost.

There were several areas of improvement and system specific insights discovered during the development process and a solution has been proposed for each should development continue on this system. 3D printing served as an excellent manufacturing process for prototyping with fast turnaround times allowing large numbers of component concepts to be tested. The Arduino microcontroller, as well as other hobby electronics boards, function well in the early phases of design but as hardware and processing requirements become better defined custom electronics components are better suited for the task. The actuators and force delivery method selected performed well for this rough prototype however further refinement is recommended including reducing the size of the cables and related components and tuning the actuators to further increase the system’s ergonomics. One unforeseen factor which potentially affected the data obtained from the experiments was the psychological state of the test subjects. As discussed previously the qualitative data obtained through self-assessments could be subject to a degree of bias, though the effects of this were not investigated. Ultimately it was recommended that data obtained from experiments such as these remain quantitative in nature to mitigate this occurrence.