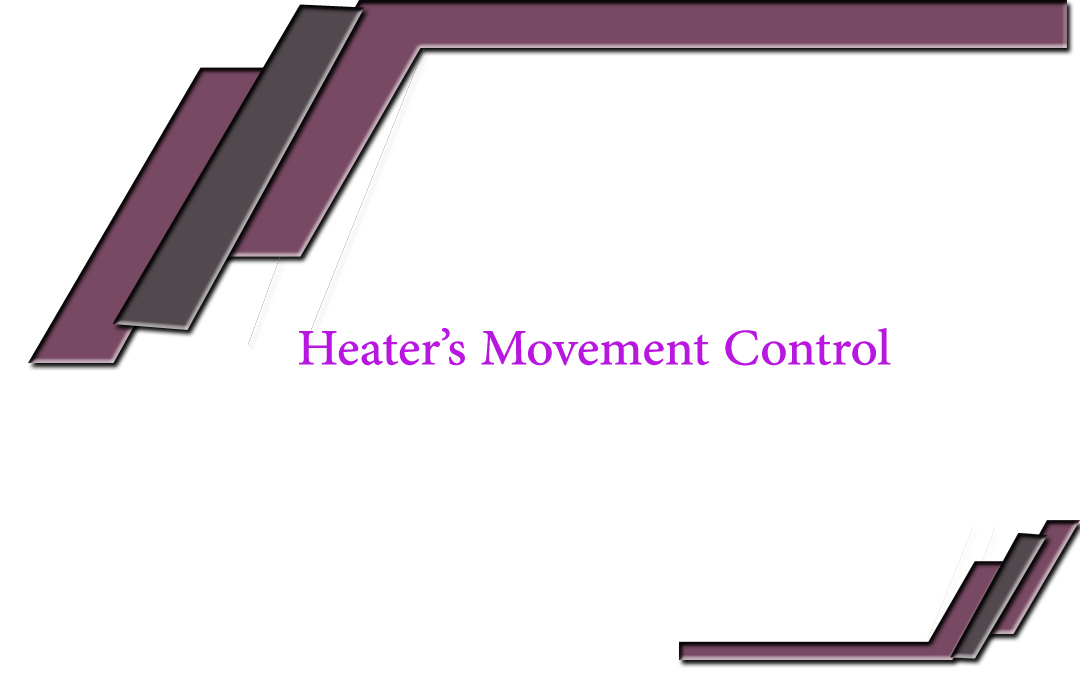 In this post, we talk about Heater’s Movement Control.

In the SLHC system, the heater tracks the person’s movement by using servo motors. The servo sub-controller generates the servo control outputs based on the signal from the main and temperature sub-controller in the SP subsystem. The servo sub-controller sends the outputs to the HR subsystem to decide the next servo motors’ turning angles. In this section, explain the heater’s movement control method using to the celestial coordinate system and the mapped angle data (MAD) table.

The heater frame makes a pan/tilt movement of the heater. The movement corresponds to Altitude (vertical) and Azimuth (horizontal) in the celestial coordinate system. As shown in Figure, the heater frame’s tilt motion in the vertical direction can be described in the Altitude angle. Altitude angle is used to express the elevation above the horizon by the angular movement. The ascending motion of the heater is expressed as the positive ALT value (z+) and the descending motion can be expressed as the negative ALT value (z-). The single servo’s position at the angle 90° corresponds to ALT 0° if the servo’s 0° angle position is set at the most ALT value of the positive or negative side. For the pan movement, we use the Azimuth angle expression. The angle measurement starts at the north point at AZ 0° that is anywhere on the positive y-axis except the origin and it ends at the south point at AZ 180° on the negative y-axis of the x-y plane. Basically, AZ 0° matches to the servo angle 0° and AZ 180° is same as the servo 180° position based on the single servo’s angular movement. Therefore, the AZ 90° indicates 90° position of the servo motor. The servo motor controls the horizontal (pan) movement of the heater. 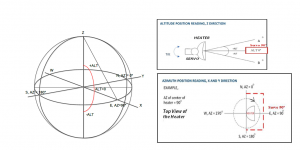 The heater’s direction is regulated by the microcontroller in the HT subsystem. The pulse width modulation (PWM) signal from the microcontroller for each servo makes the angular movement for the heater’s vertical and horizontal direction. However, the individual servo’s action cannot represent any meaningful information in 3D space. Therefore, we use the 3D celestial coordinate  system to describe the specified behaviors of the heater. To control the heater’s direction with 2- way movement, the 3D space coordinate information of the moving person must be converted to the zone-based 2D sectional information . The heater points the selected zone in the two-dimensional target plain according to the altitude and azimuth angle that are in the range of the target zone. The particular coordinate of the person in 3D space is predetermined by the calibrated 2D zone information. The information corresponds to the dimension of the observation area and the mapped angle data (MAD). To read the signal from the SP subsystem and to generate the servo control signal, the servo controller algorithm is implemented on the
microcontroller. Therefore, the servo controller algorithm operates the servos’ turning angle to change the heater’s direction based on the prerecorded values in the MAD. There are two options in using MAD table; OP1 and OP2. For the normal tracking operation, we use the values corresponds to the target coordinate of OP1. For the [LL] temperature control operation, we use OP2 values that are assigned as 5° to 10° different in AZ coordinate from the target coordinate in OP1. (Note: The coordinate values of each zone in the table can be varying based on the
condition of the implementation.)

The example is shown in Figure . The target location is in the range of the zone 5. The heater changes its direction following the angular information, ALT 0 and AZ 135. (For the [LL] temperature control operation, the values will be ALT 10° and AZ 125° . To adjust the heater’s pointing direction to the location, no tilt motion is required. But the servo makes the pan motion by rotating its shaft for 45° (from 90° center point) to cover zone 5. The number of zones and the coverage can be varying based on the heater’s coverage in the distance and the
location of the heater.