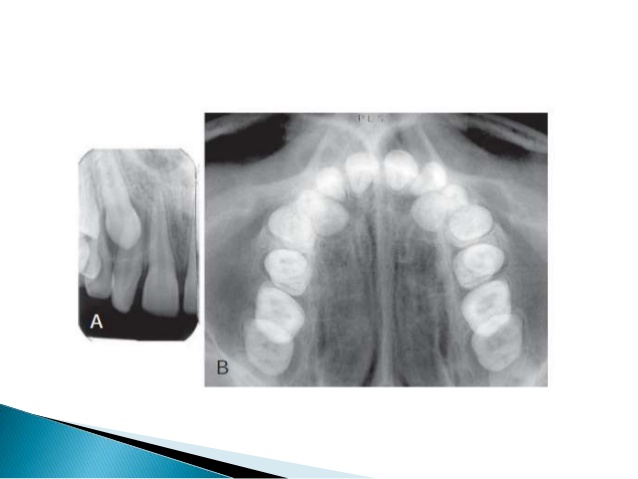 In dentistry, prior to the use of CBCT or digital imaging, conventional radiographic film was the norm. As in any field of science, studies have been carried out to test and determine the best diagnostic tools. For obvious reasons, a two-dimensional image has its limitations when trying to evaluate a three-dimensional object. Researchers have tried several approaches to improve the diagnostic quality of traditional film, when other technology was unavailable at the time. Brynolf was one, who in 1970 conducted a study to determine whether taking one radiograph or taking multiple from different angles improved its diagnostic ability. She found that taking two radiographs was more accurate than one, in detecting bone lesions. She used 212 cadaver maxillary incisors, 111 diseased and 101 disease-free, took PAs, from an orthoradial view, eccentric view, and an orthoradial view taken with a tubular diaghragm. Posteriorly she took a histologic sample to compare with the radiographs taken. The problem is that the same clinician who chose the samples took the radiographs and performed the histology, creating reviewer bias as well as increasing the prior probability of finding disease. Another issue with this study is that only maxillary anterior teeth were used, therefore findings of this study can only be generalized to maxillary anterior teeth, and cannot be correlated to mandibular or posterior teeth. The study also suffers from spectrum bias, given that all the teeth were either completely healthy or definitely diseased, with no incipient or questionable radiographic findings.

As the years went on, more studies such as Sogur et al confirmed that taking two radiographs that were at least 10 degrees apart was more accurate than taking a single film. However, when compared to CBCT technology, it was not nearly as accurate. In 1989, Katsanulas and Lambrianidis discussed the use of xeroradiographs detecting bony lesions. Xeroradiography uses a selenium plate on a thin layer of aluminum oxide, which is uniformly charged, and when struck by photons, energy diffuses out of the selenium plate in proportion to the photon’s potential. This energy is then transferred to a paper or transparent plastic sheet. Xeroradiographs require one-third of the dose needed for conventional radiographs and is a valuable alternative for detecting caries, calculus and periodontal disease. It is also valuable for interpreting periapical structures. According to the authors, the ideas behind xeroradiographs were that it possessed two major properties. One, it demonstrates wider exposure latitude than conventional films, permitting portrayal of the entire spectrum of densities in a single image. Second, it has “edge enhancement”− small structures such as bone trabeculae, fine structure details and subtle areas of density differences are made more visible. However, even with the images being sharper, their diagnostic ability was not deemed any better when compared to traditional radiographic film.

With the goal to improve veracity, the next technological improvement was digital substraction radiography. The system involved taking two radiographs at the same angle and position, at two points in time to see if there had been any changes between them. In order to display a change over time, pixel values from the initial image are subtracted from the latter, removing the unchanging background distractions. Kullendorf et al showed that the subtraction technique was significantly superior for shallow lesions, which are smaller than 2 mm in diameter and confined to cancellous bone. For deeper lesions, larger than 2 mm and involving the cortical bone, conventional radiography gained strength, however the subtraction technique was still significantly better. A latter study confirmed the findings that digital subtraction radiography does have much greater accuracy, in this particular study 91%, in diagnosing lesions in cancellous alveolar bone when compared to conventional radiography. Next, Dove et al analyzed and compared the sensitivity and specificity of digital subtraction and conventional radiograph images for detecting periapical and periodontal bone lesions. The authors came to the conclusion that even when radiographs are taken from disparate projection geometries, diagnostic subtraction radiography is capable of excellent discrimination between healthy and disease states in vitro.

An issue with all the studies is that they all are weak in their experimental design. Many of these used sequential enlargement of bur holes in vitro. By doing this, not only are they recreating lesions that do not mimic clinical findings but also they are repeatedly using the same teeth to be evaluated for the presence or absence of disease. This of course, calls into question the relevance of its findings. Lack of independent samples skewed clinical applicability, given that examiners had particular advantages when examining images that would not be present clinically, such as performing the experiments and then evaluating the images themselves. Some of the study designs have increased prevalence, or a higher proportion of disease present on the sample, not representative of a real clinical scenario, by including all teeth as being diseased. This in turn increased the prior probability and satisfaction of search for examiners evaluating the images. Such errors lead to false sensitivity and specificity in evaluating the diagnostic quality of these tools, therefore no viable conclusion can be reached.