Arduino is an open-source electronics platform based on flexible, easy-to-use hardware and software. Arduino boards are designed to combine with many different sensors and integrate in specific ways through code in the Arduino Integrated Development Environment. The microcontroller on the Arduino board is programmed using the Arduino programming language, which is based on the Wiring language.
Processor, memory, and input requirements for the datalogger were also taken into consideration when choosing an Arduino board and future expandability for other sensors. Expansion boards were used to remove the use of prototyping breadboards and to keep the system compact and free of loose wires (Figure 1). One of the expansion boards connected the onboard GPS and microSD data card for storing wind speed and GPS data. The second expansion board connected the power, a small LCD screen that displays data in real-time, and the anemometer. 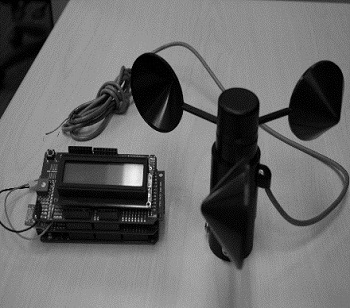 1 review for Arduino Code for Measurement and Control System