The software design using two Freescale 1321X-SRB’s involves creating three separate programs that communicate with each other in one way or another.

Two of the programs are for each of the 1321X-SRB’s, as each will be performing different tasks and communicating differently, while the third is a PC application that will communicate with the microcontroller connected to the PC.

For the design mentioned beforehand, the 1321X-SRB connected to the PC is in a way the middle-man between the PC and remote microcontroller board.

The primary purpose of the remote microcontroller is to gather sensor data and control lighting and air conditioning, while the PC application will be capable of displaying data collected by the remote board, while adding the functionality of controlling the air conditioner.

Freescale’s Code Warrior and their SMAC based software is used to program the two boards, while MATLAB” is utilized to create a GUI and program to communicate with the boards over USB.

The remote 1321X-SRB powered either by batteries or a DC power adapter is where much of the home automation features are put to use. This includes the proximity sensing, current sensing and load control, ambient light and temperature monitoring, as well as air conditioner control. There are multiple ways to go about programming the microcontrollers. Instead of constantly transmitting collected sensor data to the PC connected microcontroller, the data is only transmitted upon request, as seen in Figure 1. 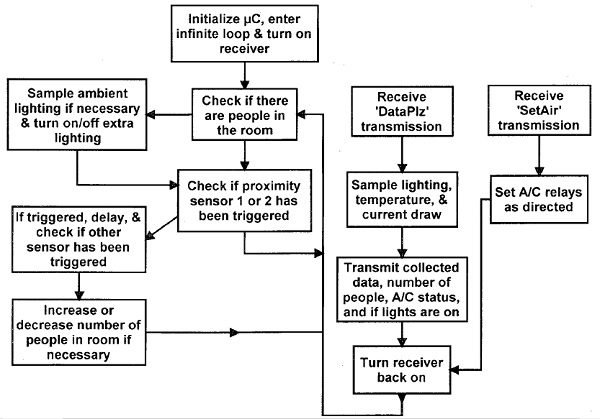 As shown in the flowchart, the microcontroller is checking the proximity sensors most of the time, as they are set up in a polling interrupt manner. If one of the proximity sensors triggers the interrupt flag, the other sensor is checked after a short delay to see whether a person entered or left the room. The microcontroller is always keeping track of how many people are in the room, and if there is at least one person, the ambient lighting is checked as well. If necessary, the lighting is turned on as well, and if the room ever gets very bright again or there are no people in the room, the lighting turns off. As mentioned, data is only transmitted upon request, and the microcontroller responds by sampling the ambient lighting, temperature, and current draw. To achieve better accuracy, the sensors are sampled multiple times and averaged. The data is then transmitted to the other 1321X-SRB connected to the PC, along with other information such as the number of people in the room and the status of the relays. Similarly, when this remote microcontroller receives a request to set the air conditioner, the relays are configured as desired. The next time sensor data is transmitted, the status of the relays will show if the air conditioner is set appropriately. The core program code for the remote transceiver can be found in this project. Programming the complimentary 1321X-SRB is done similarly, however communication will take place between both the remote microcontroller as well as the PC.

The PC programming was done using MATLAB®, creating a graphical user interface that assists in communicating with the PC connected microcontroller.
Simplifying the implementation of the program, Figure 2 shows the basic outline of how the software functions. The first steps involve initializing any variables, opening the user interface figure, as well as connecting to the microcontroller. To gather data, a countdown is used to request the collection of sensor and other information at certain intervals. The data is gathered transmitting the string ‘D’ as described previously, and the data is also gathered any time the air conditioner is set differently. The program will update the display with all of the relative data regarding sensors and A/C status on screen.