Dyes, such as Indocyanine Green (ICG), are used in several surgical applications, including highlighting regions of interest in anatomy when visible light is not ideal for doing so, visualizing blood flow, and locating pathogens. Visualization is typically accomplished by injecting the dye into the bloodstream or region of interest, illuminating the scene with a laser tuned to the absorption wavelength of the dye, and capturing the scene with a camera system that filters out the laser’s wavelength but is sensitive to the dye’s emission wavelength. The resulting fluorescence image is typically overlaid on a visible light image of the scene.

Fluorescence images are more difficult to use than typical visible spectrum images for a few reasons. Chief among these reasons is the physical difference between the two modes of imaging. Images in the visible spectrum consist almost entirely of surface reflections of the illuminant, whereas in fluorescence imaging in endoscopic surgical applications, the illuminant must travel through at least one layer of tissue and be absorbed by the dye that has concentrated in the blood or bile, which then emits photons at lower energy levels, which must travel back through the tissue before finally being captured by the camera. The deleterious effect of all of these stages of energy transfer, of course, is considerably magnified as distance from the subject increases due to the exponential relationship between incident power and distance. Consequently, fluorescent signals are even more sensitive to degradation in the optical path and irregularities in the pattern of the illuminant than are visible signals. Additionally, in the endoscopic surgical application, the subject being imaged is typically dominated by moist tissue, which means all forms of incident light can easily produce specular reflections. Since these reflections can slightly alter the wavelength of the reflected light, any reflection of the dye excitation light can actually cause it to move outside of the effective range of the imaging system’s excitation light filter, making it no longer distinguishable from the dye’s emission wavelength. Again, this not really a problem for the visible light portion of the image. These problems, and potentially others, contribute to the quality of surgical fluorescence images being very dependent on circumstances, which reduces their overall diagnostic and reference utility. 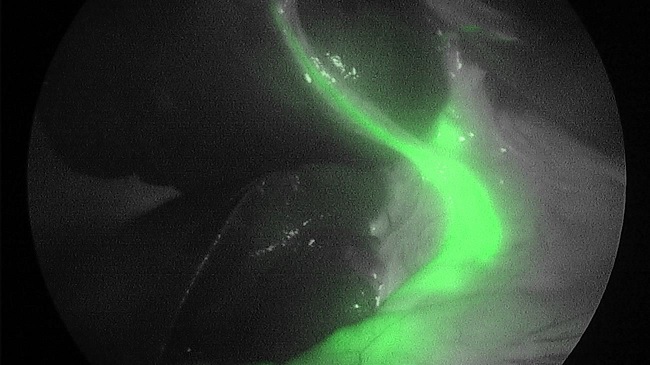