This Code attempts to aid military vehicle system representatives with design specific test strategies that have an increased relevance to current actual operating conditions while taking into account the PM’s and the test center’s abilities and constraints.

By employing mathematical optimization techniques, exploring the wide array of options open to the PM, and weighing needs and desires against available data, time, and staffing, the PM or customer can more confidently choose the most relevant vehicle test plan that best suites his requirements and his constraints.

The rapid deployment of automotive systems has caused the Department of Defense test community and the Aberdeen Test Center in particular to reevaluate and redefine traditional test plans and practices in order to maximize the amount of valid and pertinent data obtained from shortened test schedules. As a result, this thesis studies new transformation plans to provide ways to optimize military test plans.

These transformation plans take into account existing military vehicle data from multiple sources including the Aberdeen Test Center’s automotive road courses. These transformation plans are not only useful for shortened military tests, but can also be easily employed in developing test plans for private industry customers as well as long term test projects. The benefits in all cases are the same: an optimized test plan for automotive endurance operations.

The Problem and a Solution

The rapid deployment of automotive systems has caused the Department of Defense test community and the Aberdeen Test Center in particular to reevaluate and redefine traditional test plans and practices in order to maximize the amount of valid and pertinent data obtained from shortened test schedules. However, the process of creating a detailed test plan can require significant time and effort. This process is called a transformation plan because it transforms information about customer requirements and operational data into a detailed test plan. ATC customers desire transformation plans that create highly relevant detailed test plans using the least amount of time and cost.

Unfortunately, test planning can become routine. Development programs simply reuse the detailed test plan that was used last time without investigating its relevance to new environments. This routine transformation plan reduces the time and effort involved but can lead to inappropriate test plans. Consider, for instance, using a test plan developed soon after World War II for testing trucks that, sixty years later, will be driving not on the streets of European cities but instead on highways through Middle Eastern countryside.

To address this problem, a set of transformation plans were systematically developed that can be used to create highly relevant detailed test plans using the least amount of time and cost. The relative performance of these plans was evaluated as they were implemented for two common military vehicle systems. This work studied two specific cases: the M915 truck tractor and the M1114 HMMWV. A set of feasible transformation plans that are relevant to both cases were created. Both vehicle systems were soon to undergo automotive endurance testing at ATC, and, for both vehicles, data obtained from 30 days of operation in OIF was available in the EUDB.

This code has a document (194 pages) which describe the algorithm in detail. 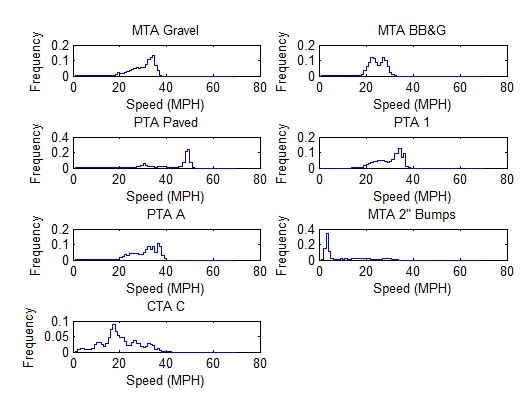