One of the problems in the control valve is stiction. This problem is shown in the following figure: 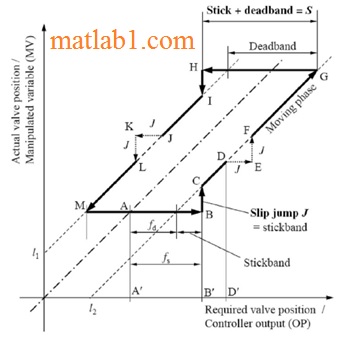 Stiction is the static friction that needs to be overcome to enable relative motion of stationary objects in contact. The term is a portmanteau of the term “static friction“, perhaps also influenced by the verb “stick“.

The presence of nonlinearities, e.g., stiction, and dead band in a control valve limits the control loop performance. Stiction is the most commonly found valve problem in the process industry.

We produce data for our algorithm by following Simulink model:

This Simulink model is made based on the following paper :

We extract features from the output signal. Then Support Vector Machine (SVM) is used for stiction detection.

After training SVM, We use trained SVM for stiction detection in test data. SVM can detect stiction and dead band.