MATLAB/Simulink code for vehicle model of the 2007 BMW Mini

An eight degree of freedom vehicle model of the 2007 BMW Mini in C+D configuration was utilized to study the effect of nonlinear tire stiffness, road vertical profile, and shock absorber damping on braking performance. The vehicle model included vertical and longitudinal dynamics and only in-plane motions were considered. Stopping distance was used as a performance metric. The vehicle model was realized in Matlab/Simulink environment.
This helped the realization of nonlinear force vs. velocity curves for the shock absorbers and tire force vs. deflection curves. The Pacejka formulation was used for calculating longitudinal tire forces. A simplified brake system was also modeled; it uses an idealized anti-lock system to avoid wheel lock during limit braking.

This project is just a document, which contains Simulink and MATLAB files for simulation. 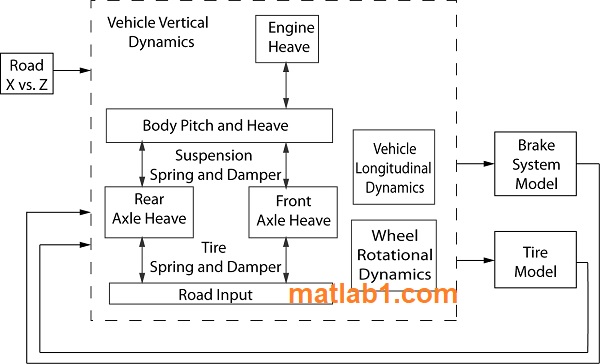 Model based design in Simulink