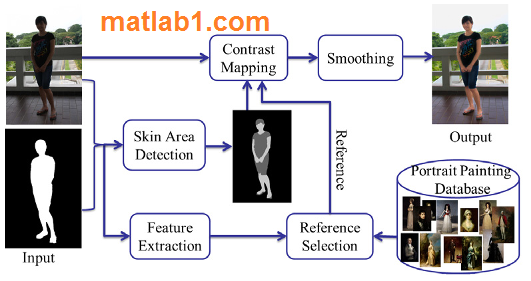 This paper proposes an approach whereby the regional contrasts in snap-shot style portrait photographs are enhanced using pre-modern portrait paintings as aesthetic exemplars. The reference portrait painting is selected based on a comparison of the existing contrast properties of the painting and the photograph.
The contrast style in the selected reference painting is transferred to the photograph by mapping the interand intra-regional contrast of the regions, such as the face and skin area, reminder part of figure, and nonfigure region. A novel two-part partial contrast stretching method is proposed to achieve the contrast mapping.
Finally, the transition boundary between regions is smoothed and the non-figure region is blurred. The experiment results demonstrate the effectiveness of the proposed method.