360 degree stereoscopic image capture makes it easier to capture full scenes in a limited number of images. Because of this quality, it is useful to utilize the these spherical images in computer vision and virtual reality applications such as depth estimation and 3D scene reconstruction. Based on the principles of disparity map generation, we aim to improve 3D stereo reconstruction by using multiple spherical views.

We tested our algorithm on four scenes: A car garage, a living room, a back yard, and a hallway. The car garage was the most successful example, with a good 3D representation of the car and various appliances in the garage. This can be attributed to The living room was not as successful, due to flat surfaces, like walls and patterned objects, like the carpet and curtain. The yard dataset was a special case, providing many cubic shapes and uniform lighting that provided good disparity readings with optical flow estimation. The hallway provided the least accurate results due to barrel distortion of the straight, long walls in the scene. The results of our algorithm on these datasets are shown at the end of the report. 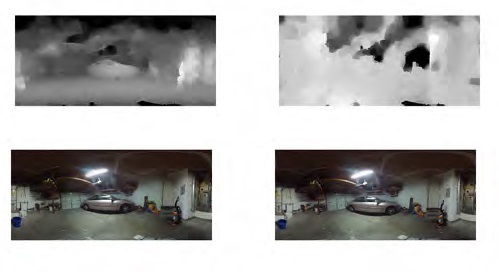 Optical flow estimations for vertically displaced frames. The y-component (on the left) can be directly used for disparity estimation. 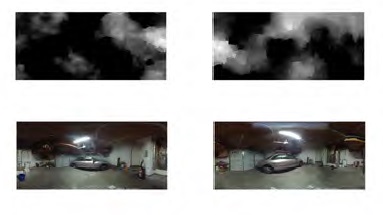 Training an autoencoder via conjugate gradients with a L2 reconstruction