The objective of this project was to model and simulate the implementation of wireless technology in naval ship system-of-systems. More specifically, this research presented tools that facilitate the consideration of optimized manning with reduced manning level by utilizing the latest wireless communication technology.

A Zonal Model previously developed by Mahulkar and McKay served as the platform for the developing the updated wireless network model.

The first objective was to model and simulate the wireless technology operations in naval ships. Physical experiments consisting of signal strength measurement and data transfers at former Burtsfield Elementary School were performed and the nonlinear relationship between the location of crewmembers, signal strength, and the corresponding data rate was recorded and analyzed.

A relationship between the distance between users and APs, received signal strength, and the corresponding data rate was formulated into a hybrid automaton. Despite various other wireless signal strength and data rate measurement techniques available, the model developed could capture the behavior of the signal under various emergency scenarios and simulated ship environments.

The second objective was to optimize the wireless network configuration to satisfy the manning requirement set forth by the United States Navy. Among all factors that determine the optimized manning, the ship’s capability establishes the limit on the minimum number of crewmembers that must be readily available at all times. At least 60% of the current manning level is required for combat readiness and other vital operations on ships. The wireless network could meet the demand and functionality required. 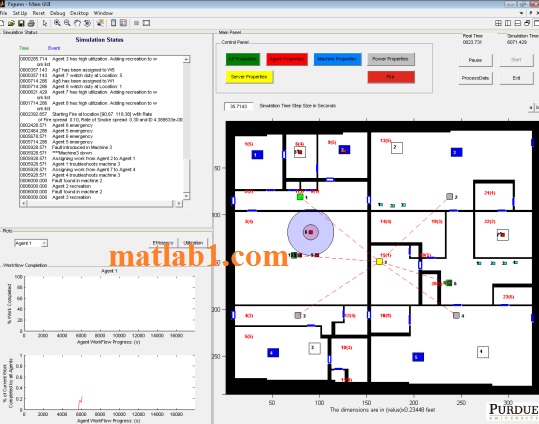 MATLAB code for Monte Carlo simulation of fluorescence in the retina