We use viola and Jones Detector [7] to detect traffic signs.

Viola and Jones propose to use Harr-like feature extractor to extract features:

Then we normalize the features to make it have a norm of 1:

According to Viola et al., for a 24 by 24 feature window, we can extract approximately 160,000 dimensions of features. 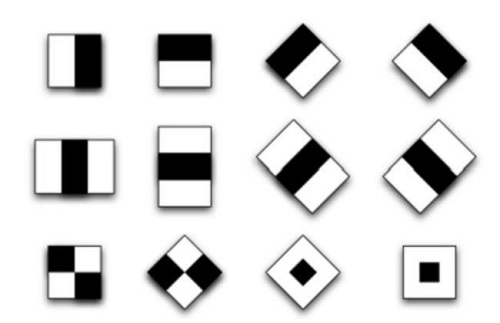 160,000 dimensional feature is a large number. Viola et al. assume in the paper that only a small fraction of these features are useful and that the main problem is how to find useful features for this small fraction. Adaboost classifier is a suitable suitable choice, because this classifier has feature selection capabilities. The principle of Adaboost is to construct a strong classifier connected in parallel by multiple weak learners. Each weak learner multiplies its classification result by weights according to its own accuracy. The final output is the sum of all classifiers output. The classification accuracy of each weak classifier can be very low, but the accuracy of the whole strong classifier is very high.

Be the first to review “Traffic Sign Recognition” Cancel reply