This project demonstrated an innovative automatically restyling system that turns a plane human portrait to one with effects that correspond to his/her facial expression.

By training recognition model using convolutional neural network and machine learning algorithm, the system is able to detect emotion of the person in a picture. Based on the emotion, the system modifies the photo in a way that highlight the user’s feeling. This restyling was done using a Kinect camera module collecting color and depth information of the character.

Utilizing techniques such as graphical relighting and background modulation, the system turned an ordinary human portrait into a dramatic photo with cinematic effects.

An overview of the project layout is depicted in Fig. 1.

This project uses a Kinect for Windows R V2 module. Kinect consists of an infrared(IR) camera and a color (RGB) camera. One emitter project patters to be picked up by the IR camera are used as a stereo pair to triangulate points in 3D space. Fig. 2 shows the outside and camera geometry for a Kinect model. The IR camera has a resolution of 512*424 pixels the RGB camera has a resolution of 1920*1080 pixels. The field of view is 70 * 60 degrees while framerate rates at 30 frames per second with operative measuring range from 0:5 to 4:5m. 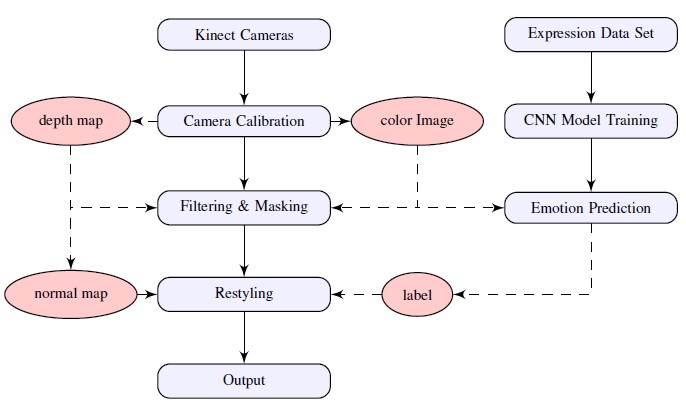 1 review for Kinect project by C++ and MATLAB and caffe