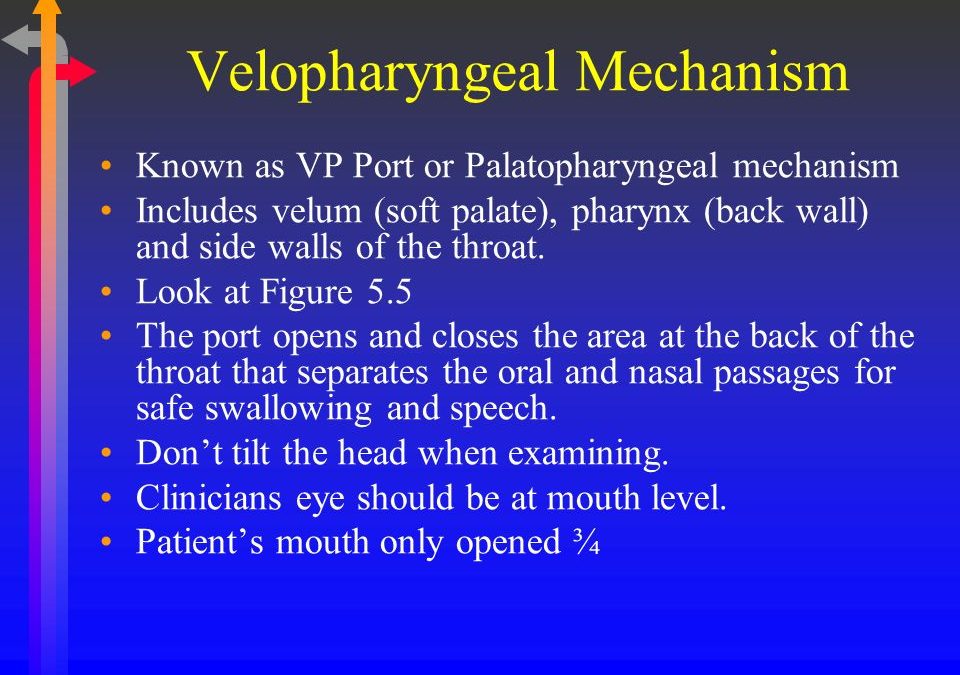 In cleft palate anatomy, structures of the vocal tract and articulatory system are altered due to changes in the osseous points of attachment of the associated musculature. Rather than inserting medially in the velum to create a sling, fibers of the levator muscle attach to the lateral and posterior portion of the existing hard palate. Research has demonstrated anatomical differences in those with cleft palate including an altered site of levator attachment, variation in tissue composition within the velum, and muscle hypoplasticity  The current understanding of cleft palate anatomy in infants and children is limited because many tools used to evaluate the VP region cannot feasibly be applied to these 3 populations. Research using MRI has enabled safe visualization of the VP region in these more challenging populations. Perry observed infants with unrepaired cleft palate to exhibit more acute angles of levator muscle origin at the cranial base compared to those with normal anatomy. Perry et al. (2011) observed more variability in levator muscle length, distance between origin points, velar length, and velar thickness in infants
with cleft palate compared to those with normal anatomy.

Evaluation of the Velopharyngeal Region

Currently, naso endoscopy and video fluoroscopy are the most commonly used tools in the clinical evaluation of VP function. However, neither naso endoscopy nor video fluoroscopy allow visualization of underlying musculature. Pigott (1969) observed the VP region through naso endoscopy, but no quantitative data could be obtained regarding the morphology of the underlying muscles within the velum. Videos obtained through these methods have been clinically useful, but these videos do not allow for reliable quantitative measurements to be obtained from multiple views or in multiple planes. Skolnick (1970) examined the VP mechanism during speech production based on the assumption that lateral pharyngeal wall movement occurred at the same level of velar movement during closure. Croft, Shprintzen, and Rakoff (1981) examined velopharyngeal closure patterns using naso endoscopy and videofluoroscopy and noted that closure typically occurred below the level of the posterior nasal spine, contradicting Skonick’s (1970) assumption. Naso endoscopy is invasive, does not provide consistent views between participants or throughout multiple examinations, and commonly produces a distorted image.