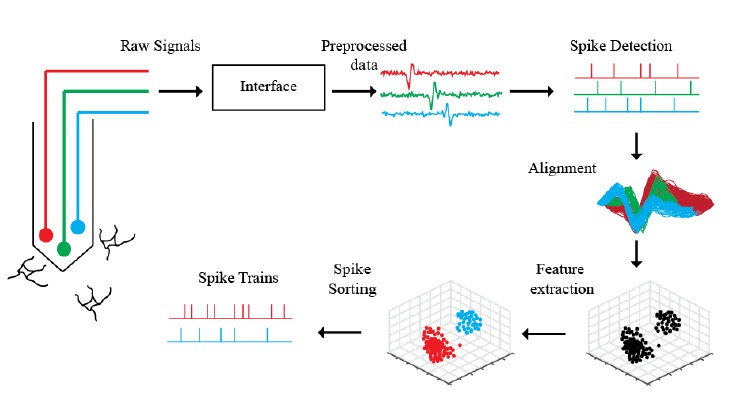 Most extracellular recording experiments follow the same general process to collect multiunit activity and identify individual neurons in the environment, albeit employing different methodologies for each step in the process, as depicted in Figure 2.1. Raw signals collected by electrodes are recorded and amplified by an electrophysiological recording system. The incoming signal is filtered to reject frequencies outside of the interest bandwidth and sent through an analog-to-digital converter to be digitized and further processed. Before beginning an experiment, a training period is allocated to evaluate the baseline characteristics of the received signal in every channel of the electrode array and select operable channels. During this period, a spike detection algorithm can be trained to identify action potentials in the recordings from operable channels and set the detection parameters for the remainder of the experiment. The timestamps of the spikes detected by the algorithm can be employed to extract spike waveforms lasting 1-3 ms surrounding these locations. The process of selecting the reference point in the window around which to center the spike waveform is referred as spike alignment . To discriminate between action potentials of individual neurons, a spike sorting algorithm can be employed using the aligned templates and other more complex and computationally involved parameters . Given the continuous nature the neurophysiological recordings and thus of the action potential waveforms extracted, digitization can introduce significant variations from the actual waveform to the recorded waveform. The undesired waveform variations can affect further processing and make the spike detection, alignment and sorting process nontrivial problems . The processing steps for extracellular recordings are summarized in Figure 2.2. The acquisition and analysis of action potentials in extracellular recordings can be performed either online, where spike detection and sometimes sorting is performed during acquisition, or offline, where the recordings are stored and processed after the experiment. The main reasons for online acquisition methods include closed loop experiments, where the experimental settings are adapted in terms of the neuronal response, rapid analysis of recordings, and reduction of data transmission and storage requirements .

Figure 2.2. Processing pipeline for extracellular recordings in electrophysiological experiments. The electrodes in a microelectrode array record activity of surrounding neurons. The raw signals are amplified, filtered, and digitized through an electrophysiological interface. The pre processed signals bandpass filtered at the desired frequency bands (typically 300-3k Hz for action potentials) are analyzed through a spike detection algorithm to obtain putative locations (i.e. discrete locations usually referred as timestamps) of action potentials. The recording segments lasting 1-3 ms surrounding the action potential timestamps are stored as putative spike waveforms and aligned (usually with respect to the most negative peak) to determine the most dominant features from which these waveforms can be clustered. The sorted spike waveforms are employed to create single-unit spike trains by superimposing the timestamps for a given cluster, and these true spike trains can be employed for further analysis.