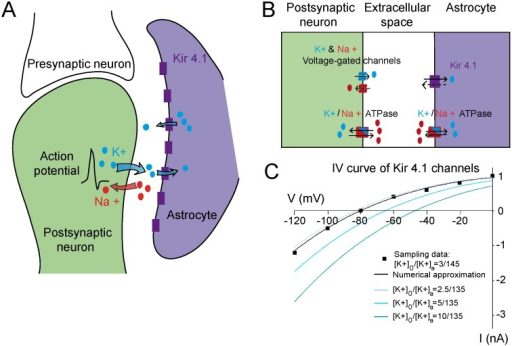 Neurons are composed of three components: soma, axon, and dendrites. As in any cell, the soma or cell body is responsible for metabolic function, but in neurons it is further specialized to maintain high levels of biosynthetic activity. Inputs are received and integrated by the dendritic arbor (and to a small extent the soma) and transmitted through the axon. The three components of the neuron constitute a system analogous to a transmitter, channel and receiver. Upon excitatory stimulation, which is received mostly at the dendrites, there are slight changes in the membrane potential

as a result of ion channels opening. The summation of these openings leads to a depolarization that can propagate through the cell. In particular,

depolarizes until it reaches a threshold voltage of 0

, at which point it overshoots to approximately +30

and then repolarizes back to

. However, the membrane continues to hyperpolarize beyond

for a short period, and later decays until the potential returns to

. An extracellular signal results from the flow of ions across the membrane and contains action potentials, which typically last between 0.5 and 3 ms. The typical waveform of a generated action potential is presented in Figure 2.1. It is important to note that the production of action potentials is a threshold phenomenon that can only occur given a sufficiently large stimulus. The current that will cause the neuron to produce, or fire, an action potential is the stimulus threshold. Any input current is compared with respect to this threshold and categorized as a subthreshold or suprathreshold stimulus.