James Parkinson described Parkinson’s Disease as a mental disorder that forces body parts into involuntary tremors . According to Lorraine V. Kalia and Anthony E. Lang, the leading cause for developing PD is death of dopaminergic neurons in the Substantia Niagara leading to a deficiency of dopamine in the Basal Ganglia 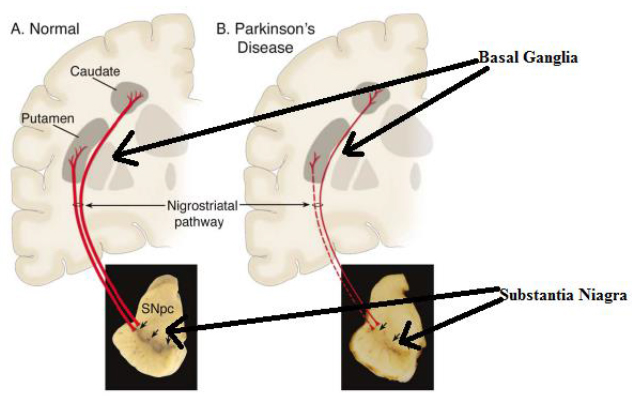 FIGURE 1. Comparison of normal brain and a brain of patient suffering from PD

Bradykinesia refers to slowness of movement, a prime feature of Parkinson’s Disease. Reduced firing rates in neurons result in Bradykinesia. As a result of Bradykinesia, a patient may suffer from loss of spontaneous movement, problems in sequencing, overall slowness in movement, difficulty in performing a task with fine motor skills, drooling, loss of expression, decreased arm swing, and decreased blinking .Bradykinesia patients are unable to activate appropriate muscles. Moreover, Electromyography suggests that the patients must produce a burst of agonist, a signal to activate muscles, to fuel the entire movement . Therefore, the Bradykinesia is measured by performing several fast movements with reduced amplitude. Such movements are difficult to produce in PD without external cues. It is difficult to measure the slowness in movement of a person as the slowness varies from person to person. Therefore, it is not advisable to use Bradykinesia for the day to day measurements of PD. Rigidity Rigidity is an increased resistance to the movement of the body parts. Rigidity also means an increased pain in the shoulders, which is often diagnosed as the arthritis. Moreover, rigidity may vary according to age, time, and exercise executed by a person. It is challenging to quantify stiffness in a physical quantity and observe change over a period of time. In summary, rigidity is not a useful symptom for the measurement of Parkinson’s Disease. Postural Deformities and Instability Deformities may occur in the form of abnormal postures (scoliosis), flexed neck, trunk posture, flexed elbows, and knees. It also encompasses the deformity formed in the backbone . The striatal deformities especially occur more often in younger patients. Bent spine, scoliosis, and truncal flexion is worsened by walking. Pisa syndrome is characterized by tilting of the trunk when sitting or standing. Loss of postural reflexes that removes the sense of balance usually occurs in the late stage of Parkinson’s Disease . Hence, loss of postural stability results in falls. For instance, a patient cannot comprehend when the body is moving in the wrong direction or when the body is about to fall. Treatment of dopamine helps in reducing the effect but it is impossible to remove the postural flexion permanently. Albeit, it can be relieved by sitting or sleeping in the supine position. Additionally, leaning against a wall and stretching can help to some extent.

Tremors are a highly specific symptom observed in PD and the current project’s backbone. It is observed in the lips, chin, jaw, and legs but rarely in the neck. It possesses a frequency of 4-6 Hz. Sixty-nine percent of patients observed tremors at the onset of PD and 75% during the course of PD. DeLau and Breteler concluded that almost every single patient experienced tremors at some stage of PD . Tremors are both internal and external, and they are experienced both during day and night. Tremors remain consistent from onset to death. Hence, tremors are quantified by measuring acceleration of tremors within the range of resting tremor frequency.

Historically, one of the best ways to diagnose PD is to detect the presence of Lewy bodies in the Substantia Niagara, which is confirmed by pathology. However, the test is costly and the application of Levodopa to confirm PD can have a devastating effect on the patient who is falsely detected. There are a few symptoms that point to a possible diagnosis of PD. William dauer and Serge Przedborski discusses patients who have a problem working on a task requiring fine motor skills . The person starts to drag a foot due to freezing of gait. This results in problem in walking in a crowded area where constant maneuvers are required. Loss of rhythm is clearly evident when a person is swimming in circles. Moreover, handwriting inches upwards and becomes cramped as it goes towards the end. Additionally, non-motor symptoms are observed such as loss of smell, disturbed sleep due to REM sleep disorder, falling backward often, urinary inconsistency, problems in swallowing, and amnesia . Basic symptoms are first detected such as Bradykinesia, facial expression (immobile or rigid), tremors, and emotions are expressed slowly. A mobile test is performed such as foot tapping and walking as well as repetitive finger tapping for 20 seconds with reduced amplitude. If the patient is 40 years or younger, a tremor is usually observed in the hands or legs. However, if the patient is older than 60 years, they will have a tremor in the chin, jaw, and lips. The important step in determining if the patient has PD is a favorable response to Levodopa.

The brain performs an ensemble of essential tasks such as maintaining blood flow, providing a signal to the motor muscles, logical thinking, and interpreting images and noises . Each task is a well-coordinated symphony of signals transferred from a cluster of neurons in the neural network. But, sometimes this symphony is broken due to the misfire or absence of a proper signal transfer in a few neurons, which results in the total or partial breakdown of motor activities. Due to the loss of dopamine, the motor neurons try to compensate by sending signals to each other regularly. As a result, misfired signals from the neuron perform motor activities, which involuntarily cause tremors. Tremors are generally sinusoidal. As the stages progress, the frequency does not change, but the time length and amplitude varies . The tremors observed by Aner Weiss et al. were sinusoidal. Weiss et al. performed the experiment of movement of PD patients to observe the change in their tremors during the movement. Out of all the observed four major symptoms, tremors are one of the most quantifiable and consistent symptoms. Hence, it is possible to measure patient’s progress consistently. Tremors are usually observed at a frequency between 4-6 Hz with a characteristic acceleration produced in each tremor. This frequency measurement makes it a useful criterion for detecting PD . The frequency remains unaltered for tremors; therefore, it is advisable to follow a process to detect tremors for PD detection as it remains unaltered in time and circumstances.