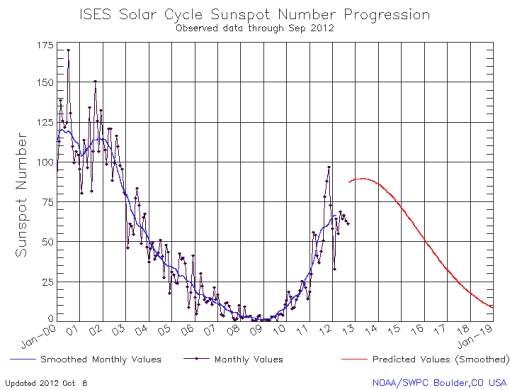 The introduction of Solar Power Plants (SPPs) will have different financial effect in the MP and the PAB scheme. These effects are a function of market price, which depends on the bids of participants. Although the assumption of perfect competition means that a single participant cannot affect market price, the combined bidding of all participants does affect the market price. The amount of produced power by renewables is needed in the bidding. Therefore power prediction for renewables is important, as any mismatch between predicted energy during the DA and actual energy delivered translates into a penalty. Therefore it is important to explore available prediction methods. The following are some popular methods in solar forecasting:

This method assumes that the predicted value will be the same as previous measurement. This method gives a good estimate for short-term solar power prediction but has a high error in cloudy days. In areas that have clear sky condition, persistence forecasting might outperform some new forecasting methods. This good performance is for multi-plant forecasting as the variance get less. Currently, there are few markets that use this method for renewable energy short-term forecast production like NYISO , CAISO , and Hawaiian Electric Company . In Dammam City in Saudi Arabia, between the months May to October, the average number of partial cloudy days is 3 per month, and overcast days are around 0.5 days. For the months between November and April the number of partial cloudy days are 8 per month and overcast days 3 per month . Having such clear sky profile makes using persistence forecasting in Saudi Arabia attractive. The error of persistence forecasting might be higher than other more advanced forecasting methods however its simplicity makes it attractive .

This method forecasts solar irradiance based on first getting a sky image of the area using a special device like the “Whole Sky Imager (WSI)”. Then the captured image is analyzed to identify clouds. After that, it approximates cloud movement. Finally, based on historical solar irradiance and collected meteorological data a power prediction is generated. This method does not consider new cloud formation or dissipation. Also, it does not capture multiple cloud layers. The time horizon for this forecast is between 5 to 20 minutes .

This approach in concept is similar to the sky image method, but it uses satellite sensors instead. The main improvement is that the satellite image covers a larger area with advanced infrared image sensors. Using this technology can help in calculating accurate cloud speed. Classical methods had poor morning prediction due to inability to collect data during the night. New models are equipped with infrared channels that function day and night. This method can predict solar irradiance up to 6 hours ahead of time  showed that implementing infra-red channels reduce the RMSE value by 20%.

Both EWMA and WCSMA are typical methods used for solar irradiance prediction. Basically, EWMA uses last day data at the same time, and the previous interval with a weight factor to predict next hour production,

Where E(i) represents the measurement at the end of the previous interval. E′(i) is the average data of previous days.

H(d, n+1) is the mean of past D days at time n+1 which depends on the day condition (sunny, cloudy, or mix). By using this method, the average error has dropped from 75% (EWMA) to 15% (WCSMA) in the case of alternating between sunny and cloudy days .

This method is well known for its ability to forecast solar irradiance for long time horizons. It uses more than 50 parameters such as temperature, air pressure, satellite images, and more. Results of the forecast are provided in a three-dimension grid, and calculations are done between two to four times per day. Globally there are a few centers that do this forecast like the National Weather Services (NWS) in the USA, European Center for Medium Range Weather Forecast (ECMWF) in the UK, and DWDGME in Germany. These centers can predict solar irradiance up to 360 hours ahead of time  showed that this method is considered the best method available for DA forecasting for solar irradiance as it compared different methods in different location and NWP was shown to have the lowest RMSE value. In [53] the authors showed that in solar irradiance forecast with an extra step on ECMWF model an RMSE value of 4.6% could be achieved for DA forecast and 3.9% for intra-day forecast (this includes night time). In  Environment Canada’s Global Environmental Multiscale (GEM) was used for solar irradiance prediction. The authors added a Kalman filter to the model. They were able to achieve a RMSE range between 6.4% to 9.2% which is around 15% lower than typical GEM value .

Neural Networks (NN) is one of the popular intelligent systems methods. It is inspired by the nerve system. There are many versions of NN, but all of them have the same concept. Like any intelligent system, it needs training before being able to give an accurate output. There could be many inputs and outputs. An NN depends on many inputs, like solar radiation, temperature, humidity, and wind velocity. This information goes to different hidden layers of “neurons” that need to be trained based on a large dataset. Depending on the program, many inputs or all inputs can be connected to one or many neurons. Then a weight (w) value will evolve by training. The training data are select randomly from sample data. In solar power forecasting case, there will be one output for predicted solar power value, see Figure 9. An important issue with NN training is that over training can lead to “memorization” of the results which means that we will get the correct result only if we have the same input and any small difference in the input values will lead to wrong output. That is the reason that after training is done it has to be verified with none trained data.Many papers discussed different methods of using NN in solar power prediction. In general, they showed that as the number of inputs increases (e.g. sunshine hours, air temperature, humidity, latitude, longitude, and altitude), the solar power prediction error reduces