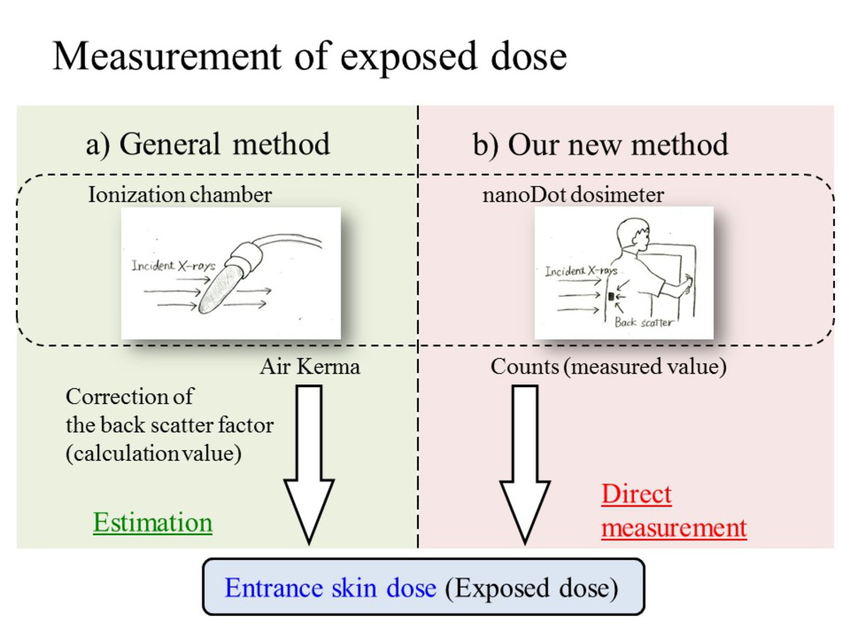 In this section we briefly review different definitions, units, and measurement methods of X-ray dose in CT imaging. Dose is a general term used to quantify how much radiation exposure aperson (or other material) has received. Radiation dose quantities are described in three ways: absorbed, equivalent, and effective. The amount of energy deposited in a substance is called the absorbed dose. The absorbed dose is measured in a unit called the gray (Gy). A dose of one gray is equivalent to a unit of energy (Joule) deposited in a kilogram of a substance. Equal absorbed doses will not necessarily produce equal biological effects in a living matter. In fact, the effect depends on the type of the radiation (alpha, beta, gamma, etc.) and also the tissue that receives the radiation. In order to be able to compare the biological effect of different types of radiations, a weighting factor is used. The weighted absorbed quantity is then called the equivalent dose and is measured in a unit called Sievert (Sv). Hence, 1 mSv of any type of radiation will have the same biological effectiveness. Another quantity that describes the dose is the effective dose. Different tissues and organs in the body have different sensitivity to radiation. To achieve an indication of how exposure affects each tissue, the equivalent dose is multiplied by a conversion factor, which is related to the weight and sensitivity of a particular tissue or organ, giving the effective dose in units of Sv. The entrance skin dose is usually measured using an ionization chamber. Such a chamber is the simplest of all gas-filled radiation detectors, and is widely used for the detection and measurement of ionizing radiation (X-ray, gamma, beta, etc.). It is a solid envelope surrounding a gas (usually air) filled cavity in which an electric field is established to collect the ions formed by the radiation. These devices usually measure air kerma. Air kerma is the energy released per unit mass of a small volume of air when an X-ray beam irradiates it and the resulting dose is normally expressed in mR. To compare the doses of X-ray CT examinations, the dose measure should be converted to mSv. The Roentgen (R, also R¨ontgen) is a legacy unit of measurement for the kerma of X-rays. It is named after the German physicistWilhelm Conrad R¨ontgen, the man who discovered the X-ray; an achievement that earned him the first Nobel Prize in Physics in 1901. One R¨oentgen is the amount of radiation that will produce, under normal conditions of pressure, temperature, and humidity, in 1 kg of air, an amount of positive or negative ionization charge equal to 2.5810?4 coulomb.One R¨oentgen of air kerma deposits 0.00877 Gy (0.877 rad) of absorbed dose in dry air. Hence, in order to convert the measured dose (mR) from the device to mGy, we should multiply it by 0.0087. After converting the dose to mGy, a conversion factor must be used to obtain the effective dose in mSv (e.g., the conversion coefficients published by the National Radiological Protection Board (NRPB-R262)). The computed tomography dose index (CTDI) is a commonly used radiation exposure index in CT. Several variations of the CTDI have been defined. For example, the CTDI100 reflects the dose contribution from a 100-mm range centered on the index slice, measured by ionization chamber. The weighted CTDI (CTDIw in mGy) is the average radiation dose in scan volume measured in standard CT phantoms. It reflects the weighted sum of two-thirds peripheral dose and one-third central dose in a 100-mm range in a cylindrical acrylic phantom (either 11 cm in diameter for a head phantom or 21 cm in diameter for a body phantom). CTDIw is directly proportional to radiation dose in unit volume, influenced by pitch factor. To make the dose independent from pitch, CTDIw is defined as CTDIvol divided by pitch. Dose-length product or DLP (mGy.cm) is equal to the product of CTDIvol and the scan length. It is directly proportional to total scanned radiation dose.