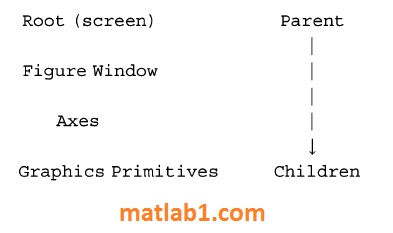 In other words, the Figure Window is in the screen; it includes Axes, which are used to orient graphics primitives, which are the building blocks of plots.

A Figure Window is an object; the data in objects are stored in properties. Just calling the figure function will bring up a blank Figure Window and return its handle; by assigning the handle of this Figure Window to an object variable, the properties can then be referenced. For example, if no other figures have been created yet, the following will create Figure (1).

• the name of the figure: none was given so this is an empty string

• the color: given as a vector storing the values of the red, green, and blue components of the color

You may not understand most of these properties; do not worry about it! Notice, however, that the Parent of this figure is the Root object and that there are no Children since there is nothing in this Figure Window.

The get function returns a structure consisting of the names and values of the properties; once stored in a structure variable, the dot operator can then be used to refer to the value of a particular property.

The get function can also be used to retrieve just one particular property; e.g.,
the Color property as follows.

The function set can be used to change property values. The set function is called in the format:

For example, the position of the Figure Window could be modified as follows.

Another method for referencing or changing a property of an object is to use the dot notation. The format for this is:

This method is new as of R2014b and is an alternative to using get and set. Using the dot notation is preferable to using get and set since the handles are now objects and this is the standard syntax for referencing object properties.
For example, the following stores the current value of the Color property in a variable and then modifies the Color property to a darker gray.

Note that this is the same as the notation to refer to a field in a structure, but it is not a structure; this is directly referencing a property within an object. This can be confusing, so here is a review of the variables that have been created:
• The variable f is the handle of the Figure Window object. Objects have properties, which contain the data. Object properties can be referenced using the dot operator,

e.g., f.Name.
• The variable fstruct is a structure that contains the names and values of the properties. Fields in structures can be referenced using the dot operator,

For the figure object stored inf, its built-in class is matlab.ui.Figure; “ui” is the abbreviation for “user interface” and is used in many graphics names. This can be seen using the class function.

The class of fstruct, on the other hand, is struct:

For example, for the figure referenced by the handle f, we can find the properties; note that they are not listed in alphabetical order as with get and that only the names of the properties are returned (not the values).

The methods for the figure fare as follows.

Again, much of this will not make sense but notice that the methods are derived from the superclass handle. The methods, or functions, that can be used with the object f include get and set. Also, the methods eq and ne are defined; these are equivalent to the equality (==) and inequality (~=) operators. That means that the equality and inequality operators can be used to determine whether two figure handles are equal to each other or not.

The various plot functions return a handle for the plot object, which can then be stored in a variable. In the following, the plot function plots a sin function in a Figure Window and returns the object handle. This handle will remain valid as long as the object exists.

Notice that the plot is generated using the line graphics primitive. As with the Figure Window, the properties can be viewed and modified using either the dot notation or using get and set. For example, we can find that the parent of the plot is an Axes object.

The objects, their properties, what the properties mean, and valid values can be found in the MATLAB Help Documentation. Search for Graphics Object Properties to see a list of the property names and a brief explanation of each. For example, the Color property is a vector that stores the color of the line as three separate values for the Red, Green, and Blue intensities, in that order. Each value is in the range from 0 (which means none of that color) to 1 (which is the brightest possible hue of that color). In the previous plot example, the Color was [0 0.4470 0.7410], which means no red, some green, and a lot of blue; in other words the line drawn for the sin function was a royal blue hue. More examples of possible values for the Color vector include:

Changing the line width in the figure makes it easier to see the line and its color, as shown in Fig. 1. Also, tab completion is available for class properties and methods; e.g., if you are not sure of the exact property name for the line width, typing “hl.Li” and then hitting the tab key would display the options.

This Children property of the current figure stores the axes that orient the plot; these axes are also returned by the gca function.