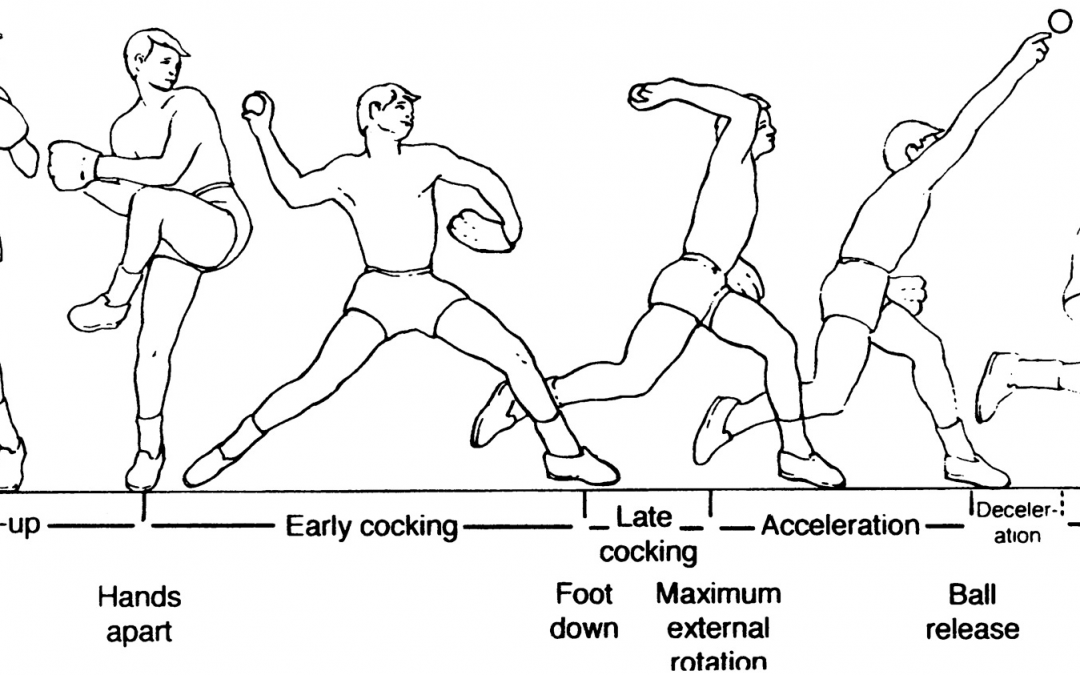 The physical act of overhand throwing is an accumulation of forces generated throughout the entire body. The motion could not be completed effectively without each part functioning in a specific way. Being able to smoothly and effectively transition from segment to segment helps increase the amount of force created and allow for repeatability of the action with consistent results. Poor mechanics can alter the complex chain of events in pitching and lead to extra stress on the shoulder and elbow These forces are also the driving cause of UCL injuries in overhand-throwing athletes To better understand these forces, both the upper and lower extremity need to be examined to find where the force is generated. The throwing motion can be broken down into six different phases (Figure 1). These phases apply to both position players and pitchers in baseball. There is some difference in execution of these phases between the two, but the main concepts stay the same. Each phase of throwing can be examined in both the upper and lower extremity.

The windup initiates the process by positioning the body in place where it can generate the greatest force possible. It begins with the shifting of the center of gravity over the back (pushoff) leg which then allows the thrower to raise the lead leg, starting the generation of force The phase finishes when the lead leg reaches its peak and the hands separate the ball and glove Between pitchers and position players this motion can look somewhat different. Pitchers usually accomplish this phase much slower than position players who do not have as much time to throw the ball. Position players also move toward their target with their whole body while pitchers only take one step towards their target.
Then the early cocking phase begins where the windup left off and ends when the lead leg makes initial contact with the ground As the lead leg begins to move toward the target, the hip and leg musculature of the stance leg fire and begin to propel the pitcher forward. The shoulder is abducted to 90 degrees and slight horizontal abduction occurs Hip rotation follows and is the major force generating factor in the phase. As the lead leg separates from the stance leg, the pelvis rotates quickly (up to 700 degrees per second) to become square with the target. The amount of pelvic rotation depends on the external rotation of the lead leg and flexibility of the hip. Limitations in these areas can reduce hip rotation and cause a decrease in force generation in later phases. Lack of flexibility and hip rotation dysfunction can lead to a change in upper extremity dynamics and put more stress on the shoulder and elbow.
Next, the late cocking phase begins as the lead leg is planted on the ground and concludes when the throwing shoulder reaches maximum external rotation. To facilitate maximum external rotation, the trunk moves forward and extends as the lead leg begins to straighten, forming a solid base. In this time, the anterior shoulder contracts to bring the shoulder into slight horizontal adduction. The amount of external rotation is affected by scapular retraction, elbow flexion, and acceleration of the trunk forward causing a coiling effect Maximum valgus torque on the elbow occurs at the end of this phase. This maximum valgus torque is when maximum force is applied to the medial elbow and will therefore cause the most stress on the UCL This force exceeds the mean valgus stress of an adult (64N.m) by about 31 newtons/meter To account for the ligaments lack of strength, dynamic stabilization of the elbow is very important. The triceps, anconeus, flexor muscles of the wrist, and shoulder rotators help decrease this stress and make UCL tears much less common Rotator cuff muscles contract to counter act the distraction forces created by trunk rotation At the end of the stage, the shoulder will be in approximately 95 degrees of flexion with elbow flexion at about 90 degrees and 170-180 degrees of external rotation of the shoulder After the late cocking phase, the acceleration phase begins in the time between maximum external rotation and ball release. The scapula and rotator cuff muscles continue to stabilize the shoulder as the trunk continues to rotate and tilt. Trunk musculature flexes on the non-dominant side to strengthen the pelvic rotation and trunk rotation and tilt. Maximum internal rotation velocities can reach 7000 deg/sec This is caused by the contraction of the subscapularis, pectoralis major, and latissimus dorsi muscles. The elbow is initially flexed from 90 to 120 degrees, where it is most vulnerable for injury, then rapidly extends to around 25 degrees at the time of release. Release is aided by wrist and finger flexion as well. Finally, the deceleration phase begins after ball release and ends with maximum internal rotation and arm extension This phase is characterized by being the most violent in the throwing motion. The posterior musculature does most of the work of dissipating forces in the shoulder by stabilizing and slowing down the rotation. However, almost every muscle connected to the shoulder has a role in eccentrically slowing the arm at some point in the phase The phase ends with the completion of humeral rotation to 0 degrees, shoulder abduction at around
100 degrees and an increase in horizontal arm adduction to 35 degrees The bicep works to decelerate elbow flexion and pronation. The follow through phase is the final part of throwing. In this phase, the body completes decelerating the shoulder and moves into a fielding position. The body rebalances itself by bringing the stance leg back to equal with the lead leg. At this point joint loads return to normal and the thrower can prepare for other actions.

When the UCL undertakes more tensile force than it can handle, it tears. Studies have reported that the tensile strength of the UCL alone is between 30-35 N, but pitching has been shown to create up to 290 N of force on the elbow Therefore, a large portion of stress must be absorbed by the surrounding structures to keep the UCL from reaching those tensile limits. However, when these muscles, or bony structures fail, the ligament is not able to withstand the force and can tear. There are many different factors that affect the stabilization of the elbow and most rely on the flexor muscles of the anterior forearm to fire correctly and on time to reduce the amount of valgus stress put on the joint Poor control of the flexor pronator muscles can also lead to chronic damage to the UCL due to the constant stress the UCL undertakes. This leads to the creation of calcifications and can lead to joint gapping However, the increased stress on the elbow is not only caused by the inability of the flexor pronator muscles to protect the joint, there are a number of other issues that contribute to increased loads on the joint. A decrease in balance on the stance leg of pitchers has been shown to be a predictor for elbow injury in high school and collegiate baseball players. Garrison et al found that athletes with a torn UCL had decreased balance scores when compared to a healthy, control group.

The authors concluded that reduced balance could alter throwing mechanics due to decreased trunk control. This can also lead to a decrease in shoulder range of motion, another predictor of elbow injury. Decreased balance may also lead to an increase in contralateral trunk tilt in throwers. Oyama et al found that pitchers with an increase in contralateral trunk tilt (Glove side tilt) have increased velocity, but also have increased joint loads when they pitch. Those pitchers with a contralateral trunk tilt of greater than 10 degrees had significantly greater peak elbow proximal force, which is directly related to joint stress. Not only is the trunk affected by the hips, but also by the arch of the foot. In research done by Feigenbaum et al, researchers found that an abnormal foot posture may correlate to an increased risk in shoulder or elbow surgery. Researchers examined foot arch posture in 23 athletes and compared the data to incidence of shoulder or elbow surgery. Those athletes with abnormal foot arch posture were 3.4 times more likely to have had surgery than those with normal arch posture. This helps to show how all parts of the body affect the throwing motion and can have a large impact on injury to an athlete.