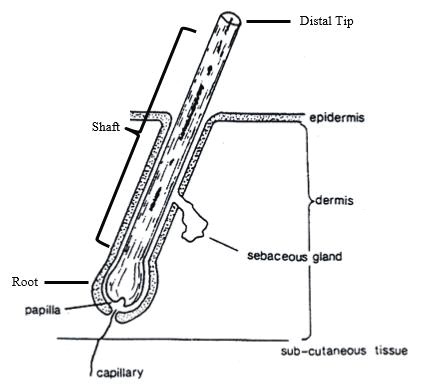 The structure of hair can be divided into three anatomical regions, and three structures within those regions. The three anatomical regions are the root, shaft, and distal tip (see Figure 1). The root is the follicular structure at the proximal end of a hair, from where the hair grows. It is also the most DNA-rich region of the hair. The shaft is the mid-section of the hair and is the most commonly compared region of the hair. The distal tip is located at the end of the hair shaft. If the hair is sufficiently un-degraded, then chemical treatments and estimate time since last cutting can be determined [6]. The three hair structures found within these regions are the cuticle, cortex, and medulla (see Figure 2).

The cuticle is the thin, translucent layer that surrounds the shaft of the hair. The cuticle is generally four to ten layers thick, consisting of overlapping, non-nucleated, pigment-free cells that form scales (see Figure 3).

The cortex contributes to the main bulk of the human hair shaft, and is composed of closely packed, keratinized filaments, and cortical fusi. The most distinctive feature of this structure is hair color. It is primarily derived from the kind and amount of pigment present. The size, shape, distribution, and density of pigment granules will differ from individual to individual . For example, the distributions can be described as clear, granular, or clumped (see Figure 6).

Figure 6: Pigment distribution in the cortex of the human hair can be described as (a)
clear, (b) granular, or (c) clumped

The medulla is the core of the hair that runs through the center of the cortex. It is comprised of air vacuoles and cells, which leads it to appear dark under transmitted light. The width and general form of the medulla varies from individual to individual, and even between and within hairs of a given individual. Different hair examiners will use different terminology to describe the medulla, but the basic descriptions are fragmented, discontinuous, or continuous (see Figure 7).

Figure 7: Three basic medullary types: (a) fragmentary or trace, (b) discontinuous or
broken, or (c) continuous