Many nations are investing in renewable energy resources in an effort to deal with global warming, reduce CO2 emissions, and improve sustainability. Solar power is a promising renewable energy resource that has the potential to grow rapidly in the upcoming years. In Saudi Arabia, solar power installation is very attractive as the annual solar irradiation is high, see Figure 1 and Figure 2 . Recently, the USA, Spain, Germany, Saudi Arabia, the UK, and other countries have commissioned many solar plants in the Megawatt scale. The number of solar power projects will continue to increase in the upcoming years . At present, governments are encouraging investments in solar energy by providing financial incentives such as subsidies, tax credits, and feed-in tariffs (FiT). These incentives can cause market price distortion; for example, some areas can have negative prices as renewables will bid negative prices in order to receive subsidies. FiTs do not distort the market price directly but do cause a reduction of market price by shifting the cost curve. As the number of Solar Power Plants (SPP) increases, subsidies will eventually become unaffordable. In Germany, the Photovoltaic FiT is being reduced every year as seen in Figure 3 . Some European countries have already started cutting off renewable energy subsidies . As subsidies disappear, SPPs will need to be treated similarly to conventional generators in the electricity market by bidding (or contracting) within market rules, a discussion of electricity market schemes will be discussed in this chapter in details. 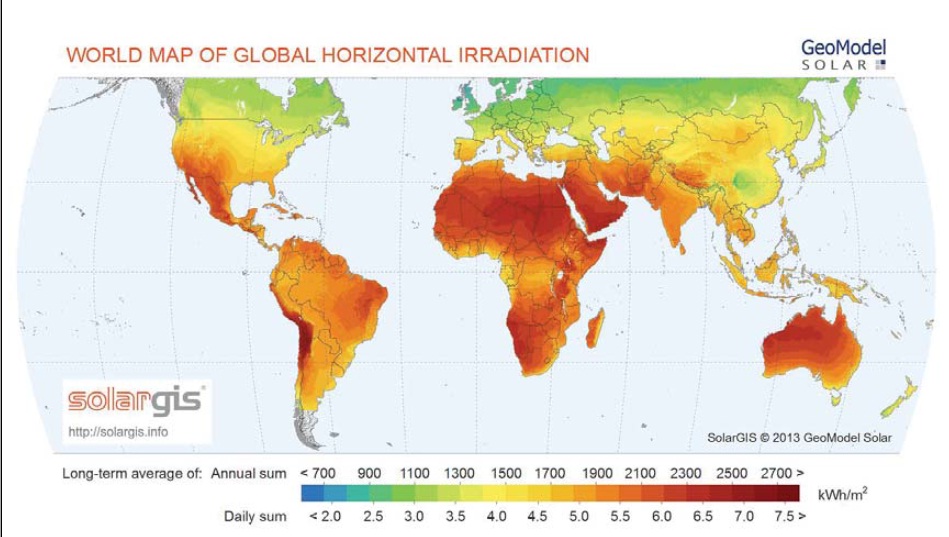 In energy markets, typical producers must bid (commit themselves) to deliver a specific amount of energy ahead of actual operation during the Day Ahead (DA) market. The DA market closure (last chance to participate in the DA market) differs between market structures. It could be one hour before Real Time (RT) delivery (e.g. UK market) or it could be up to 36 hours before RT delivery (e.g. PJM). Solar power is stochastic in nature due to changes in weather conditions and cloud movement. Because renewables are stochastic, the prediction error is significant. Hence, it is hard for renewables to predict the exact amount of energy that will be produced at any given time, which means that SPPs might not be able to meet their commitment. In markets that impose a penalty on energy mismatch (energy imbalance), this will be an extra burden on SPPs. The most two common electricity market schemes are Marginal Price (MP) and Pay as Bid (PAB) market schemes. The focus of this research is to compare the current prac tice of dealing with solar power in the MP and PAB schemes. This work will investigate solar power interaction with existing market features and suggest a market structure that motivates SPPs to participate in a perfectly competitive market. The main goal of this research is to evaluate the effect of SPP installation in the Saudi Arabian Grid and to suggest the best market features on the upcoming new electricity market by achieving optimal social welfare; part of this evaluation is to explore solar power effects for different penetration levels.

Deregulation Of The Electricity Market In Saudi Arabia

In Saudi Arabia, electricity was initially introduced in the 1930s by some wealthy families and some new companies for internal use. Generators were not connected to a grid, and they were either 50 Hz or 60 Hz based on the country of import (Europe, US). In the 1950s, the government introduced the electricity grid in major cities. Each city produced its own electricity. The regulatory authority was a department under the Ministry of Industry. In 1975, the Ministry of Electricity (MOE) was established, and its first roles were to unify tariffs, construct transmission lines for remote locations and to regulate electricity. In 1981, the MOE mandated all companiesin each region to operate under a regional company; the Eastern, Central, Western, and Southern electricity companies, as seen in Figure 4. Each company had its own standards, power plants and territory of service. In the late 1980’s the first transmission line interconnection between Eastern and Central region was constructed. In 1998, the government combined the four companies into one company called the Saudi Electrical Company (SEC). The main reason for this decision was to reduce production cost and to plan better for grid expansion. In 2001 the Electricity Regulatory Authority (ERA) was established to encourage investors to construct generators. To motivate Independent Power Plant (IPP) projects to meet the rapid growth of load in the future, the role of the authority was to set regulations for grid connection especially for independent power producers such as Aramco and Jubail and Yanbu cities independent power (MARAFIQ) and to plan the needed future generation. In 2004 the authority was renamed to Electricity & Cogeneration Regulatory Authority (ECRA). In around 2007, several debates led by ECRA concluded in favoring deregulation of the electricity market in Saudi Arabia for the purpose of having many companies compete fairly with each other. In 2008, in an effort to lay the foundation for a Saudi Electricity Market, ECRA announced that they would like to unbundle the monopoly of the government owned electricity company SEC into separate companies for Generation, Distribution and Transmission, and they would like the generation sector of SEC to be divided into at least four companies. In 2012 the transmission department was split from SEC, and the new transmission company was named the “National Grid”. In order to have a fair split of the Generation sector of the SEC, ACCENTURE was awarded a contract to prepare the guidelines. In order to have a free electricity market, ECRA decided to create four competitive generation companies by mid 2014 Having this split will lay the foundation for a free electricity market and create opportunities for investors to build new power plants to meet the annual electricity demand increase of 7.4%\.

The availability of the Gulf interconnection and the liberalization of the Saudi Electricity grid have the potential to create great opportunities for new investments in the power sector, especially solar energy. Some Gulf countries are already investing heavily in solar power. The Gulf interconnection will increase the accessibility of different Gulf countries to all electricity markets including the Saudi market. This interconnection will give geographical flexibility of plant site construction. Since the 1980s the Gulf States (Saudi Arabia, Kuwait, Bahrain, Qatar, United Arab Emirates, and Oman) realized that they would benefit from having an electrical grid interconnection, as these states spread in a wide geographic area, and the demand peak differs from one state to another. These countries agreed to construct this interconnection to lay a foundation for a future healthy electricity market, and to enhance efficiency. There were many challenges in this project; the main one was that the Gulf States had 50 Hz systems while Saudi Arabia (which would be the backbone of the project) had a 60 Hz system. It was agreed to build the whole transmission line on a 50 Hz base, although this transmission line will mostly be in Saudi Arabia. Saudi Arabia will have one tapping point at the Al-Fadhili station with a HVDC back-to-back connection (See Figure 5 and Figure 6). The first phase was connecting Kuwait, Saudi Arabia, Bahrain, Qatar and UAE by a 400 kV transmission line. The second phase was to connect UAE and Oman by a 220 kV transmission line. In November 2005, construction started and by 2009 the Gulf interconnection was in operation. The headquarters and control center of the interconnection is in Saudi Arabia.

Currently in the USA, renewable plants receive a number of different subsidies. The most wellknown subsidy is the federal Solar Investment Tax Credit (ITC), which gives around 30% tax credit on investment cost for residential and commercial facilities. This Tax Credit will be available till 2016. Also, some states and some cities have their own incentives like State tax credit and loan programs. In addition, there is a federal renewable portfolio standard (RPS) that mandates the increase of renewable energy production in the USA. The RPS differs from state to state, for example Arizona State must reach 15% of renewables by 2025, Washington State must reach 15% of renewables by 2020. California State has one of the most aggressive RPS in the USA as they must reach 33% of renewables by 2020. It is reported in California that solar power is producing more that 10% of total generation during peak hours . A review in the Database of State Incentives for Renewables & Efficiency (DSIRE) website which is established by the US Department of Energy and North Carolina State University shows that lots incentives are available in the USA that vary by state and by city . In some markets, the main incentive is exempting renewable power plants from participating in the Day Ahead (DA) market, so they get the Real Time (RT) market price, and they do not face any penalties for prediction error which mean that they are guaranteed to get paid without mismatch penalty. With the increase of solar power penetration, this incentive cannot continue as it will make it harder to balance the system and will distort the market. In Europe, most incentives are based on a feed-in tariff (FiT) where renewable power plants get a fixed guaranteed price. Recently, some European countries have cut off renewable energy subsidies. This trend is expected to continue. Many of these subsidies are not sustainable, and eventually they will diminish, and solar plants will have to participate in the electricity market in the same way as to conventional generators. This research focuses on how solar energy will participate in the electricity market when subsidies are not provided anymore