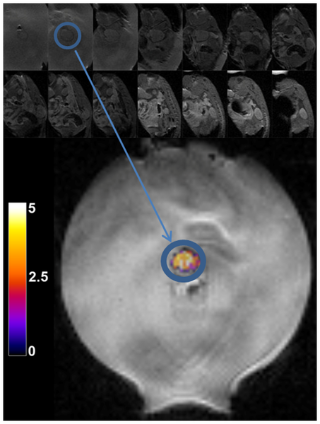 A variety of mechanisms for the non-invasive real-time monitoring of tissue temperatures in vivo have been proposed. One method is the method of microwave radiometry. All objects emit ntural electromagnetic energy whose spectral intensity is related to the temperature of the object. For example, tissues at 37°C have a peak emission intensity around 30 THz (mid-infrared). At 3GHz (microwave), the emitted intensity is approximately 108 times less than at the peak.
Sensitive equipment can detect this however the depth-of-penetration and resolution are limited to roughly the operating wavelength, i.e., a few centimeters. The method is also computationally complex. An estimate of the antenna’s radiation field must be known and an inversion process employed to work out the source distribution. The poor spatial and temporal (mainly due to computational complexity) resolution and limited depth penetration have limited the appeal of this approach. Ultrasound has also been explored as a means of obtaining temperature information. Here, the mechanism of action derives from changes in the tissue lattice, namely, the average particle spacing and the speed of sound (SOS) as a result of heating. These changes can be interrogated in a number of ways. In the echo-shift method, the arrival time of a series of echo trains can be correlated with the tissue temperature. However to do so knowledge of the how the SOS changes with temperature must be known as well as the time shift as a function of depth.

Furthermore as these are both tissue-dependent the underlying tissue must be known in order to calibrate the method. Another approach relates temperature to the change in backscattered energy (CBE). This method also requires a priori knowledge of the tissue distribution, and how the backscattered energy changes with tissue type. In controlled invitro experiments where the tissue parameters can be well characterized both methods work well. However generalizing to in-vivo measurements remains a challenge from a tissue characterization perspective. Furthermore, these methods are quite sensitive to motion due to their reliance on geometric information and therefore any extension to in-vivo experiments would require effective means of motion tracking.
Use of MRI as a means of temperature mapping offers the ability to guide thermal procedures in terms of both controlling heat delivery and in monitoring normal tissues to avoid unwanted heating and/or damage. Simultaneously the MR images provide a visual indication of the effects of the treatment on the anatomy and assists in target localization. Several physical mechanisms have been used to measure tissue temperature through MRI images, namely, T1 relaxation, water diffusion, and proton resonance frequency shift (PRFS). The first two shall be reviewed in brief, with focus on the PRFS method as this has proven to be the most robust and quantitative in vivo.