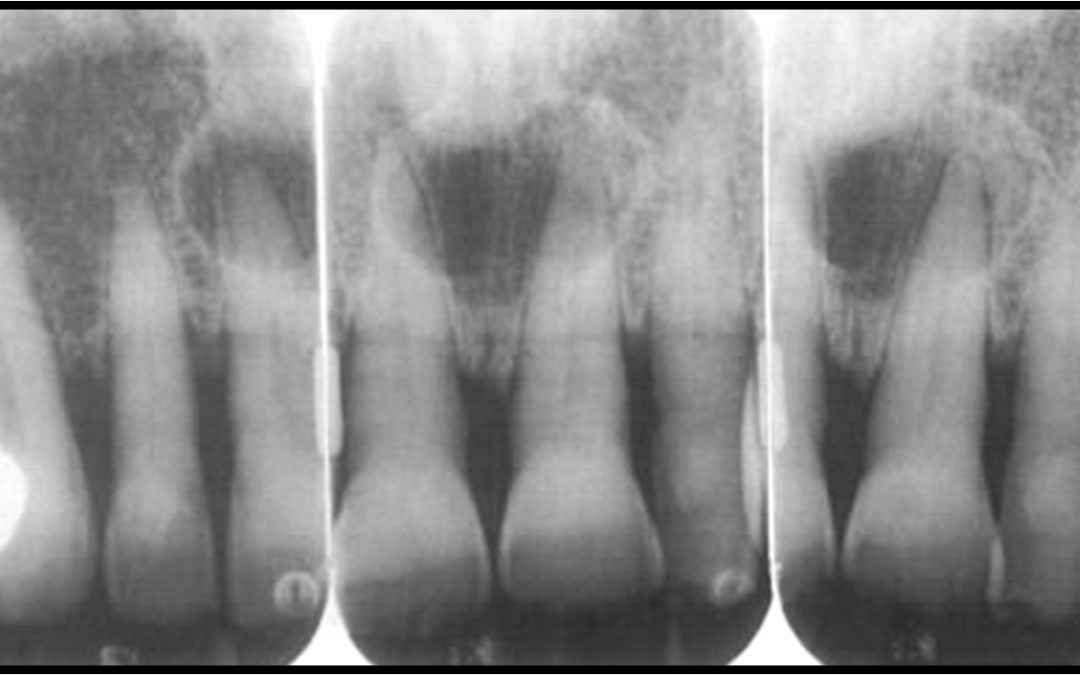 In order to properly deduce and diagnose, it is imperative for clinicians and researchers to understand and interpret the accuracy and limitations of CBCT diagnostic volumes. In endodontics, periapical radiographs are commonly used to determine pathology and as expected, many studies in the past have regarded the issues of proper interpretation. One of many investigators was Bender and Seltzer, who evaluated the appearance of holes drilled into bone with round burs of various sizes. The holes created went from a round bur sized 2 all the way to a size 8. In addition to the size of the hole, depth was also varied. The depth included drilling 1 mm deep into the cortical buccal plate, halfway through the buccal plate, all the way through the buccal cortex and though both the buccal and lingual plates. They repeated the same depths and sizes in cancellous bone. They found that lesions appear to be more obvious as they get larger, and more easily detected as the inner surface of the cortex was removed. They also found that lesions in cancellous bone were not detected radiographically, indicating that there can be significant amount of bone loss present without having radiographic evidence to support it. Thirty-six years later, Bender would publish another study expanding on this knowledge. In this study he would determine the factors influencing the radiographic appearance of the recreated bony lesions.

He determined that the lowest mineralized bone loss in order to detect a radiolucency was 6.6%. Yet, if you have to account for soft tissue, the number raises to 7.1%. For all observers to agree, 12.5% is the lowest mineralized bone loss. They also found that mineral density is greater in the periosteal cortex, then endosteal cortex and cancellous bone. The fact that cancellous bone has the lowest mineral density explains why a large amount of bone loss is needed before a lesion can be observed radiographically. Later, Paurazas et al reported in a comparison study of diagnostic accuracy using CCD, CMOS-APS sensors, and E-speed film, that lesion detection is more accurate in cortical bone than trabecular bone, and even higher if the cortical plate is eroded. This implies that in order to find developing pathology radiographically, cortical bone needs to be eroded first. Barbat et al confirmed these findings using both digital and conventional radiography. He found that artificial lesions without lamina dura and cortical plate involvement were detected more readily as the lesions got larger. On the same token, the same was not found to be true in cancellous bone.

However, once the cortical plate was eroded, the lesions were more easily detectable. He also found no difference between enhancing and not enhancing images digitally. Given these facts, Briseño et al noted that there was a difference in lesion detection depending on the area of the jaw that was being examined. He determined that lesions need to be at least 3 mm in size to be detected in the anterior mandible, yet it was much more difficult to detect in posterior areas of the mandible. Lesions in this area that had not eroded through the cortical plate were not detectible radiographically. An explanation for this finding is the higher mineral density and width present in the posterior versus the anterior area of the mandible. The anterior of the mandible being much thinner, a lesion of the same size, 3 mm, would be more easily detected anteriorly rather than posteriorly.
Contrary to the findings mentioned above, one study by Lee and Messer found an 80% detection rate of artificial lesions in cancellous bone without eroding the cortical plate. However, in their study, they simulated a sclerotic border and removed trabeculae aiding in their detection. The fact that they altered the bone in a way that is not clinically representative makes the results of this study unacceptable in representing real clinical scenarios.

For the same reason, in order to use these studies for any clinical relevance, the bony structure and its components cannot be altered in a way that does not mimic natural or pathologic processes. Kaffe and Gratt determined that vital and non-vital teeth can be identified by pattern, size, and density of bone trabeculation. The shape and width of the lamina dura and periodontal ligament is also important to detect non-vital teeth with periapical lesions. Brynolf also found that it was possible to classify different periapical lesions radiographically based on trabecular patterns, shape and width of the lesion, PDL shape and width, radiopacity or radiolucency of the lesion. Brynolf went a step further and attempted to correlate the radiographic findings histologically, distinguishing between normal anatomy and pathology. He found that conventional radiographs are very similar to the histological findings. He suggested that careful examination of the radiographs of periapical areas allows for differentiation between histologically normal and pathological cases, and classification of different types and stages of histologic periapical lesions.Several studies disagree with these findings. Several authors determined that periapical lesions could not be diagnosed based on the presence or absence of radiopaque lamina dura.

They established that it is the periodontal ligament space and its loss that can be used for radiographic interpretation. This conclusion is given that not all lamina dura are created equal, and so natural variations among people can exist, making it difficult to use the presence or absence of radiopaque lamina dura as a parameter for diagnosis of apical periodontitis. Holtzmann et al on the other hand determined that the accuracy of histologic conditions could not be predicted by radiographic or diagnostic tests. Linenberg et al found that in periapical surgery cases, diagnosis of cysts, granulomas or chronic apical abscess agreement between histological and radiographic diagnosis was in agreement 60% of the time. What is certain is that, there is no certainty with the accuracy of radiographicexams in detecting periapical bone changes or pulpal status using either digital or conventional film. One assumption that can be made, and is supported by Green et al is that teeth with periapical radiolucencies have inflamed pulp and are therefore diseased. However, the same cannot be said in the absence of periapical radiolucencies, teeth with no periapical radiolucencies do not equate with healthy pulps 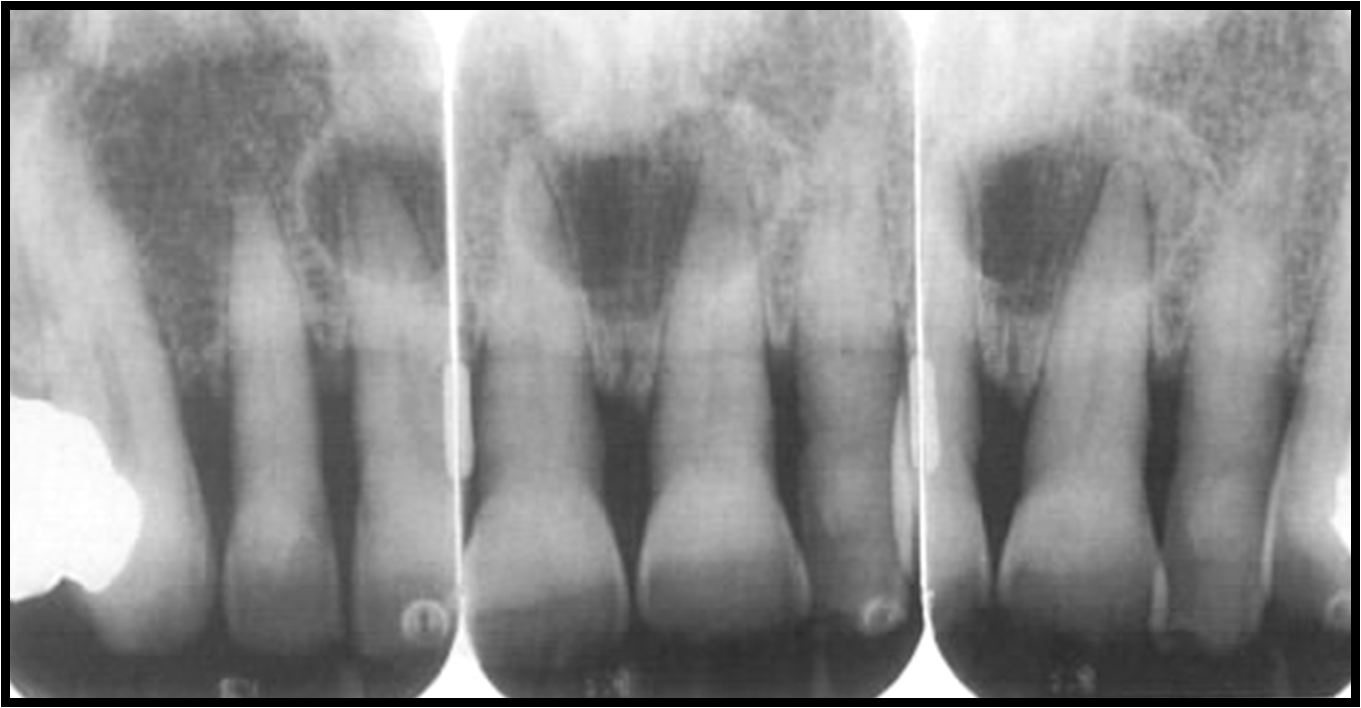