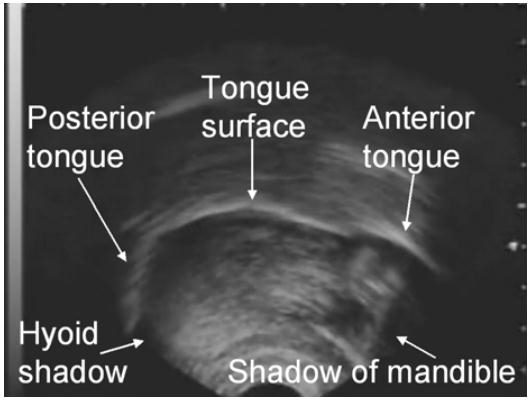 Professional level work for tongue motion has involved many different technologies to observe the tongue, due to the fact it is difficult to observe in the oral cavity. In order to fully understand speech sound articulation tongue placement is deemed critical. Ultrasound imaging has been used popularly used because costs have decreased because of technological advances and competition. Radiation exposure is considered very low and it can even be used on young children and difficult subjects. However ultrasound has specific limitations. When the signal is passed into air or bones the wave can be lost and no echo is passed back, as a result bone and air will appear black on the ultrasound image. Frequencies range between 3 MHz and 7 MHz but there are tradeoffs in which frequency is used, the lower the frequency the coarser the image but the higher the frequency the less deep the image can go. Another major drawback is that with each movement of the transducer or patient the image will change, so many researchers have had to result to using head and transducer holders which can limit speech and cannot be used on patients with illness that prevent their head from being still. In addition to these negatives, there is still the issue that the images are not easy to understand for the patient, it takes a skilled technician to be able to decipher the images and to provide feedback to the patient.

Figure 6. An Ultrasound Image of the Tongue

MRIs have also been used to gain insight to the shape of the tongue during speech production, however due to the nature of MRIs the articulations had to be artificially sustained and had to be reconstructed by the image slices. Because the articulations had to be sustained it brings into question if they can even be considered accurate as some articulations are quick and short in nature. In addition to this there is no way an MRI can be realtime, so it is not even applicable for speech therapy. However it does offer some of the best 3D images of the tongue when the images are reconstructed via reassembling the slices.

New lower cost magnetic based tracking systems have begun entering the market. These systems offer realtime tracking of sensors at a much lower cost. However because they only track the position and rotation of the sensors, it cannot be used for complete tongue visualization. But by placing the sensors on the tongue, a collection of surface points can be used to drive a slightly less accurate model. In the case of tongue placement where you are only worried about if certain locations on the tongue are hitting the correctly places in the mouth, these types of systems can be more than adequate. For the Opti-speech system we use a magnetic sensor by NDI called the Wave sensor.