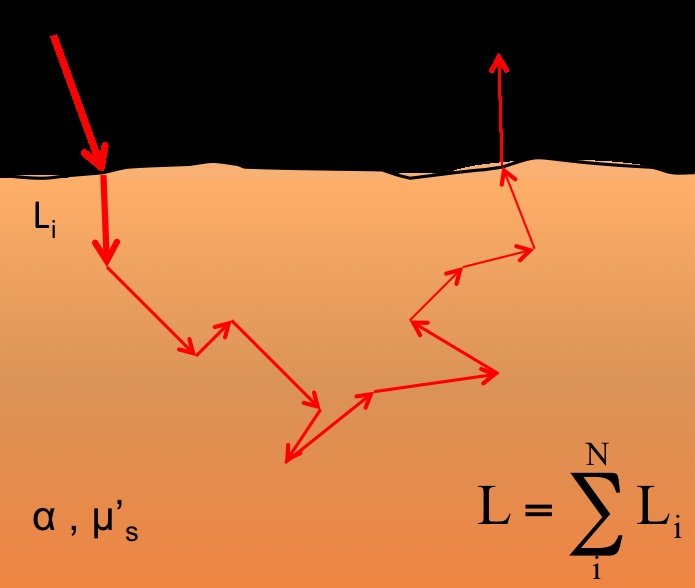 Cellular respiration and oxygen transport in the body

Since aerobic metabolism utilizes oxygen for energy production, a brief review of oxygen-based metabolism is helpful for a better understanding of our study.Oxygen (

) is transported through the body by hemoglobin, an iron-rich metalloprotein found in red blood cells. Hemoglobin exists in two forms:  deoxygenated, also referred to simply as hemoglobin (Hb), and oxygenated, generally referred to as oxyhemoglobin (

). As red blood cells move through  the body and pass through capillaries, cells utilizing aerobic respiration absorb the

into Hb. The blood is then recirculated to the pulmonary system where Hb binds with

during the respiration cycle, and the process begins again.

A tissue oximeter uses continuous-wave light at multiple wavelengths to determine the relative changes in tissue oxygenation and blood volume via absorption  spectroscopy. In the most generic form of muscle oximetry, a source emits light which penetrates the tissue and is scattered back to a detector at the plane of  incidence. The dierence in the input intensity and the intensity of light measured by the detector can be used to reconstruct the composition of the material. An  understanding of light-tissue interaction is key to understanding of this work, and is presented here. Biological tissues such as skin and muscle are  non-homogeneous, turbid, anisotropic, and strongly scattering. For a fully rigorous mathematical treatment of continuous wave monochromatic light propagation  in tissue, one must solve the radiation transfer equation,

is the eective molar extinction coecient,

is the eective scattering coecient, p(s,

) is the scattering phase function, and

is the unit solid angle about

. Appropriate boundary conditions would need to be found for each layer of tissue; the epidermis has dierent optical properties  than the dermis, for instance. As can be seen from Figure 1, even using a simplied rendition of the layers of tissue between the surface of the skin and  the skeletal muscle would leave us with four coupled dierential equations to solve. Fortunately, we are able to apply diusion theory to simplify this problem. Di  usion theory can be utilized when the absorption coecient,

, of the tissue is much less than the reduced scattering coecient,

, which is related to the  anisotropy factor of the tissue. Both skin and muscle satisfy this condition, and diusion

A broad sketch of the layers of skin on top of skeletal muscles [29]. Each
of these layers has different optical properties.

is the intensity of the source at wavelength

, I is the intensity of light measured by the detectors at some time t, L is the optical path length discussed   below,

is the molar extinction coecient of the

component of the tissue, and

is the concentration, or \weight”, of the

component in the tissue. The  absorption coecient of the

component of the tissue is given by

. The exact molecular composition and optical properties of a given in vivo  tissue will change from sample to sample – average values acquired from tables are used instead. The quantity

is often referred to as  attenuation (A); all future equations will be presented in this manner. When light is scattered, the photons undergo a random walk phenomenon, as shown in  Figure 2 – each photon travels along a dierent path between the source and detector. For photons that are scattered back to the plane of incidence, the total path  is \banana-shaped” overall and is longer than the distance between the source and detector. The optical path length is dened as the average of these  paths; i.e.,

The random walk phenomenon in 2 dimensions. Light entering the tissue
(I0) is multiply scattered inside the tissue before exiting at the plane of incidence.
The total path length (L) is longer than the distance between the source and detector

the average distance that a photon travels through the given medium before reaching the detector. The optical path length changes depending on the distance  between the source and detector and the optical properties of the material, which vary with wavelength. This relationship is shown in Eqn. 3 (below), where

is  the sourcedetector distance, and

are the absorption and reduced scattering coecients of the material, respectively

In the case of non-homogeneous anisotropic media, such as skin and muscle (Figure 1), the diusion equations become a bit more complicated. In muscle    oximetry, we are only interested in a change in concentration of two molecules, Hb and

, over time. As a result, we can eliminate from consideration any  components of the tissue that will not change over time, simplifying Eqn.2. Following previous work, we assume that the optical properties of the epidermis, dermis, and hypodermis will not change signicantly over time. This is a reasonable, given the relatively short timescale of oximetry experiments. By making this  assumption, we have entirely eliminated skin and fat from consideration; the only layer we need to model is the layer of muscle. Muscle tissue can be treated as  though it is composed entirely of Hb and

. This approximation is justied: myoglobin, the main protein in muscle bers, while present in both its oxygen-bound and reduced forms, is very nearly indistinguishable from hemoglobin optically and has a lower concentration than hemoglobin in muscle and therefore is not treated separately in the calculations. The modied Beer-Lambert law can now be expressed as

refers to a change in attenuation,

is the baseline intensity of light at a wavelength

is the intensity of light measured at some time t,

is the optical path length, and

, respectively. We will solve this equation at two wavelengths to nd

. Although Eqn. 1.4 is wavelength dependent, thus far we have not discussed how our choice of wavelengths aects the calculations. Figure 1.3 shows a plot of the molar extinction coeents of Hb and

; the  orange box indicates the NIR range. Since

, the absorption coecient, we expect low absorption in the NIR range. This results in both an increased depth of penetration and a larger signal. Because of these optical properties, the NIR range has been termed the “diagnostic window” for oximetry. For our oximeter, we have chosen to use

. More details are given in Section 2.i Once we have solved Eqn. 4 for

, we can nally solve for the

The molar extinction coecients of Hb (blue) and

(red). The orange box highlights the NIR range. Since the molar extinction coecients are much smaller  in the NIR range than elsewhere in the spectrum, we expect Hb and

to absorb less light at these wavelengths. The NIR range has been termed the”diagnostic window” for oximetry.

) of the muscle using