The advent of Cone Beam Computed Tomography (CBCT) has revolutionized dental imaging and diagnostic capabilities.  here has been a significant amount of research that demonstrates the advantages of CBCT over conventional periapical   diographs. When comparing a 3D image to a 2D, it is clear that the 3D image will provide with much more clinically significant information. Some of these advantages include diagnosing abnormal anatomy, number of canals in roots, lesions present on teeth, dimensions of such lesions, and the ability to locate “J” shaped lesions. In a recent study, Cheung et al were able to determine that CBCT was in fact more accurate than PAs in detecting canals and lesions in obturated canals. However, there was no gold standard in this clinical study, resulting in the possibility of over-diagnosing pathosis or canal anatomy. For other instances, such as post surgical healing of bony defects, detection of external root resorption, and periodontal bone levels, it appears to be superior to periapical radiographs. Claims of superiority of CBCT over traditional periapical radiography in the ability to diagnose apical periodontitis are great in number. One example would be a clinical study done by Abella et al for which no gold standard was established.

These authors concluded that the superiority of CBCT was due to its ability to detect more periapical radiolucencies, even though there was no surgical or histological examination to confirm the presence of such lesions. This fact restricts the insight we can gain giving the possibility of over-diagnosis and limits the accuracy of the assessment in this study. CBCT on its own is not a gold standard. Authors cannot use CBCTs and compare it to other diagnostic modalities when CBCTs have not been proven to be 100% accurate 100% of the time. A disease and normalcy spectrum has not been developed yet, which limits the clinician’s ability to diagnose disease versus a variability of what is normal, making CBCT evaluations prone to overdiagnosing. Two studies have made the claim of superiority. In the retrospective study by Estrela et al 1,508 teeth had primary and secondary endodontic infections, of which periapical and panoramic radiographs were able to detect apical periodontitis when the bone loss was in an advanced stage. Again CBCT showed higher disease prevalence, but no gold standard for comparison was used. In the de Paula-Silva et al study a 93% prevalence of disease, with only 7% normal samples, and non-blinded examiners, leads to questioning the validity of the results. Another perspective was that PAs have a limited ability to detect disease because it underestimates the prevalence of apical periodontitis.

The radiographic interpretation of the lesion size and dimension is smaller than what is found clinically. Both studies by Lofthag-Hansen et al and Moura et al agreed with this conclusion; that CBCT detects apical periodontitis at a higher rate than PAs. Needless to say, their studies suffer from lack of a gold standard and an extremely high prevalence rate. Others have tried comparing CBCT with a combination of two PAs from different horizontal angles, reporting once more that CBCT was better at detecting AP. Another, comparing CBCT to intraoral digital and conventional film in detecting artificial findings reported higher sensitivity and accuracy. All of the previous studies have a recurrent theme, high disease prevalence, lack of independent examiners, and 100% sensitivity for CBCT examination, all being unrepresentative of the variability found in the clinical setting. In a more reliable clinical study, Velvart et al were able to diagnose 97.5% of cases of apical periodontitis found during periapical surgery. Lesions were observed during surgery, however no histologic examination was performed. Only 76% had been found on PAs. In addition, Fuhrmann et al noted that with sinus defects not detected in PAs, the CBCT was able to better identify them, but not 100% of the time. This ability would certainly be an advantage over PAs prior to surgical intervention. 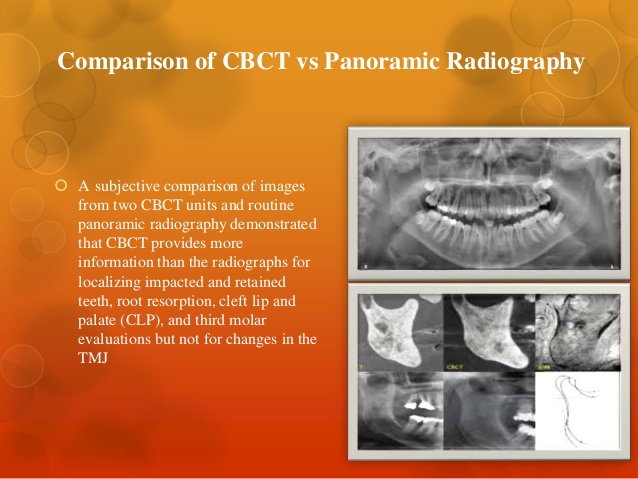