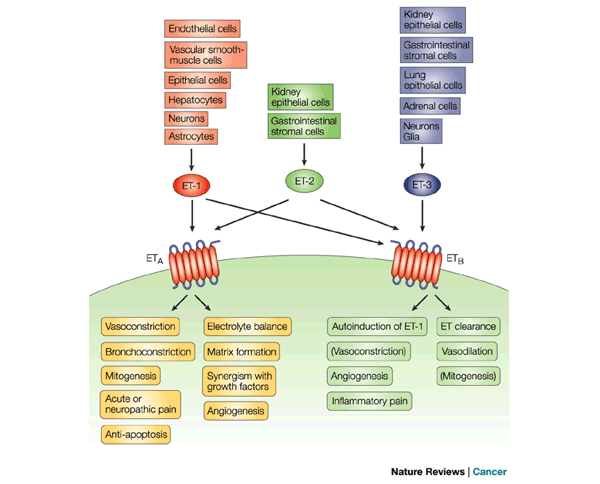 Preclinical and clinical evidence indicate that aldosterone and endothelin-1 (ET-1) may interact and hyperaldosteronism is often associated with elevated ET-1 levels. ET-1 is a 21-amino acid peptide that is produced mainly endothelial cells as well as several other tissues including lung, heart, kidney, liver, brain, and some circulating cells. (Nunez et al. 1990; Firth and Ratcliffe 1992) ET-1 acts in a paracrine and autocrine manner to regulate vasoconstriction, cell proliferation, cell migration, and fibrosis (Temple et al. 2014). Endothelial cells tend to release ET-1 abluminally resulting in only a minor portion (~20%) of the ET-1 being released into the blood. This shows that plasma level of ET-1 cannot be used to estimate ET-1 activity. ET-1 acts on its target tissues through two receptors, endothelin receptor A and B (ETA, ETB). The ETA and ETB receptors are members of the heptahelical G-protein-coupled receptor superfamily, range from 45 to 50 kDa in size (Levin 1995). In systemic and pulmonary vessels, ETA receptors are primarily located on the vascular smooth muscle cells (VSMCs) and ETB receptors are located on both endothelial cells and VSMCs. Both receptors act in similar fashion by mediating vasoconstriction and proliferation with the exception of ETB also activating the release of vasodilating factors such as prostacyclin and nitric oxide. ETB receptor is also responsible for the clearance of ET-1 through the lungs (Clozel et al. 1992; Docherty and MacLean 1998; MacLean, McCulloch, and Baird 1994). ETA and ETB receptors are found in numerous tissues such as lung, heart, kidney, intestine, eye, and brain, but the density is especially high in lung and heart demonstrating where ET-1 has the most effect (Simonson and Dunn 1990). Figure 2 shows the main actions mediated by ET-1.

Figure 3. Actions of ET-1 on ETA and ETB Receptors

This figure demonstrates the difference effects ET-1 has depending on the receptor it is acting on. Similar effects of ETA and ETB receptors include vasoconstriction, angiogenesis, and mitogenesis. ET-B receptor is responsible for vasodilation and ET clearance. Figure taken from Motte, McEntee, and Naeije 2006.

All these biological effects show the major involvement of ET-1 in cardiovascular conditions. This led researchers to explore the therapeutic potential of endothelin receptor antagonists (ERA) in conditions such as pulmonary arterial hypertension (PAH), congestive heart failure (CHF), vascular remodeling, and subarachnoid hemorrhage, with the majority being focused on PAH (Motte, McEntee, and Naeije 2006) (Figure 3). There are currently three types of ERA available: selective antagonists to the ETA receptor, selective antagonists to the ETB receptor, and non-selective antagonists that block both receptors. Numerous experiments have been conducted using all three types of ERA mostly focused on PAH. Evidence suggests using selective ERA is effective against cardiovascular conditions such that it’s able to partially prevent vascular constriction and remodeling. However, actions of ET-1 through the nonantagonized receptor are still present. Data suggests blocking both receptors being more effective than using selective ERA (Sato et al. 1995).

This figure shows diseases with increased levels of ET-1. Notably, it includes HF and arterial hypertension. The variable biological activity of ET-1 is why ERAs are being researched as treatment for most of the diseases shown.

There are numerous dual ETA/ETB inhibitors in the market today with bosentan being the first approved by the FDA. Use of the dual ETA/ETB receptor antagonist bosentan has been effective for treating PAH in large clinical trials (Rubin et al. 2002). It has been shown also to be able to lower aldosterone levels in patients with congestive HF (Sütsch et al. 2000). A more recent dual ERA approved by the FDA, macitentan, has demonstrated higher efficacy than bosentan in vivo. Macitentan showed a significant 45% reduction in the combined endpoint of morbidity and mortality in the long term SERAPHIN trial for patients suffering from PAH (Pulido et al. 2013). Furthermore, it is a dual ETA/ETB antagonist with increased tissue distribution and slow receptor disassociation which allows sustained receptor occupancy time (Iglarz et al. 2014). Lastly, macitentan also has an active metabolite ACT-132577 that has a longer half-life, which also contributes to the pharmacological activity of macitentan (Iglarz et al. 2008). For all these reasons, we aimed to test the hypothesis that chronic ETA/ETB inhibitor (macitentan) modulates LV hypertrophy and pathologic myocardial remodeling in our murine model of hypertension-induced HFpEF.