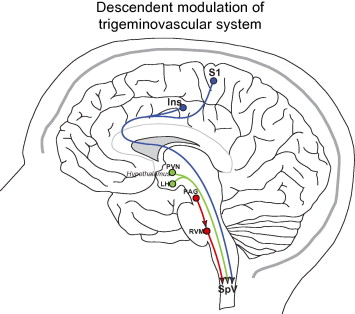 The PAG is thought to be a “migraine generator” ever since it was reported that patients experienced migraine-like pain after receiving an electrode implantation near the PAG (Raskin et al., 1987). Also, the first study to demonstrate brainstem activation in spontaneous migraine put forth the notion that migraine pathogenesis is connected to imbalanced regulation of antinociception and vascular control by the brainstem (Weiller et al., 1995). However, there is a lack of evidence to conclude that the PAG is a “migraine generator” (Borsook & Burstein, 2012). Dysfunctional brainstem nuclei, such as the PAG, is speculated to increase neuronal activity that promote TGV pain processing in the spinal and medullary dorsal horn that creates migraine-like pain (Noseda & Burstein, 2013). PAG projects less to the spinal and medullary dorsal horns and more to the RVM (Basbaum, A. I. & Fields, H. L., 1978; Fields et al., 1995; Holstege & Kuypers, 1982; Mason, 2005). Thus, neurons in the
RVM directly associated with descending modulation by RVM projections to the spinal and medullary dorsal horns. One study showed that migraine pain was invoked by facilitatory effects in the RVM (Edelmayer et al., 2009). Therefore, the PAG may not have inhibited the RVM, unlike its normal function such as when stimulation of the PAG inhibited activity of the spinal trigeminal nucleus (Knight & Goadsby, 2001). Another area in the brainstem that may be involved in the modulation of migraine
is the dorsolateral pons that is made up of the cuneiform nucleus, inferior colliculus, LC, mesencephalic trigeminal nucleus, principal sensory trigeminal nucleus, parabrachial area, and vestibular nucleus (Afridi et al., 2005b; Bahra et al., 2001; Moulton et al., 2008;  Stankewitz et al., 2011; Weiller et al., 1995).