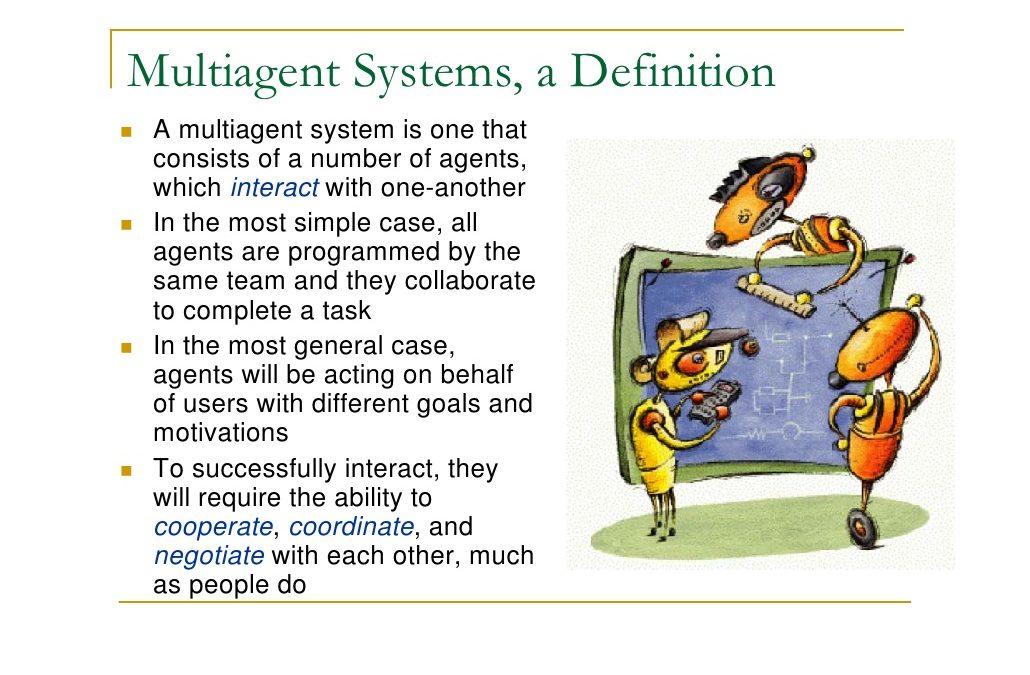 Basically, an agent is a computer system which can decide to take an action in order to satisfy designed objectives. Agents that must operate robustly in rapidly changing, unpredictable, or open environments, where there is a significant possibility that actions can fail are known as intelligent agents, or sometimes autonomous agents .Figure 4.1 gives an abstract, top-level view of an agent. In this diagram, we can see the output action taken by the agent in order to affect its environment. In most domains of reasonable complexity, an agent will not have complete control over its environment. It will have at best partial control, in that it can influence it. From the point of view of the agent, this means that the same action performed twice in apparently identical circumstances might appear to have entirely different effects, and in particular, it may fail to have the desired effect

Figure 4.1 Abstract schematic of an agent

In this section, different agent’s environments will be discussed as follows

An accessible environment is one in which the agent can obtain complete, accurate, up-to-date information about the environment’s state. Most moderately complex environments (including, for example, the everyday physical world and the Internet) are inaccessible. The more accessible an environment is, the simpler it is to build agents to
operate in it.

 Social ability: intelligent agents are capable of interacting with other agents (and possibly humans) in order to satisfy their design objectives.

For formalizing the abstract concept of the agent, it is assumed that the state of the agent’s environment can be presented as a set ? = {?1, ?2, ⋯ }. At each state, the agent can take action from action space which is defined by ? = {?1, ?2, ⋯ }. Therefore, an agent can be presented as a function: ?∗ → ?, which maps state space (sequences of states) to action space . Furthermore, the non-deterministic characteristic of the environment can be modeled by function :

which takes the current state of the environment and an action (performed by the agent), and maps them to a set of environment states. The following are different architectures for intelligent agents :
 Purely Reactive Agents
When an agent make a decision for taking an action without referring to its previous experience (history), it is called a purely reactive agent. The purely reactive agent can be represented by a function:

which maps environment states to percepts.
The action function is also defined by :

which maps sequences of percepts to actions.

 Agents with States
This type of agent, as shown in Figure 4.3, has internal data structure, which is typically used to record information about the environment state and history. By assuming ? to be the set of all internal states of the agent, an agent’s decision making process is then
based on this information. The observation function for a state-based agent is unchanged, mapping environment states to percepts as before:

The action-selection function action is now defined a mapping from internal states to actions: