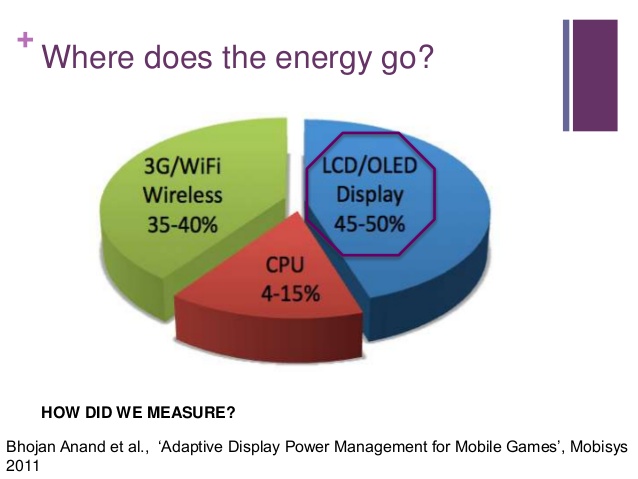 Improving energy efficiency in mobiles is very challenging due to variable workload, environmental conditions and user experience requirements. A solution is represented by Dynamic Power Management (DPM), which adapts operating conditions at runtime to improve energy efficiency while meeting performance requirements. In ACpowered systems, such as desktops and servers, it results in a lower electricity bill and reduced pollution. For mobiles, it is fundamental in order to achieve improved battery lifetime, while meeting performance and usability requirements.The main contributors to power consumption in mobiles are networking, display, CPU and GPU . Most of the subsystems in a mobile device have control variables that can be tuned at run time to change the impact on power consumption. For example, most smartphones can dim the screen brightness and turn antennas on or off. For computing units like CPU and GPU, modern MPSoC have the capability of switching frequency dynamically and power gating individual cores. Power management for systems like desktops and servers has been extensively investigated in research, leading to the development of well-established techniques, summarized in reference. Research on power management for mobiles is more recent and presents some major differences with respect to servers and desktops. Other than being powered by a battery, mobiles are characterized by a tight interaction with the user. The goal is not to always provide high performance, but rather to provide the level of performance to meet user experience requirements. Mobiles have limited resources, which requires management algorithms to have a low memory overhead and execute in very short times. Most techniques implemented in real devices today are reactive, meaning that they take control decisions based on the current and past history of the system, leading to sub optimal decisions. Existing predictive techniques are difficult to implement and require the development of runtime models that are accurate and have a low overhead. Power management is important not only for making the battery lifetime longer, but also for reducing peaks that can quickly increase the device temperature. High temperature can be also a source of discomfort, if the skin contact temperature exceeds 45oC. It also increases the impact of reliability degradation mechanisms which might