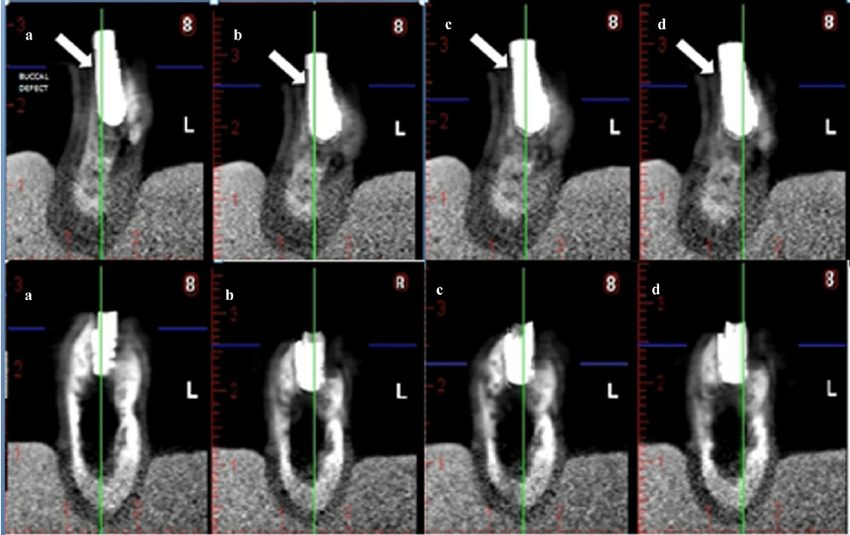 Over time studies have tried to discern the accuracy of CBCT’s ability to measure volume. Measuring the volume of bone defects could be important for clinical evaluations before both orthograde, and surgical endodontic procedures as well as monitoring outcomes by either increased or decreased volume. Esposito et al reported in vitro, that CBCTs were a reliable method to estimate the volume of endodontic lesions compared to an impression of each fabricated defect with light body vinyl polydimethylsiloxane and weighed to determine the actual volume. They found no significant difference between both methods. Ahlowalia et al performed a similar study, using bur holes, and again found no difference between the two. Yet again, Kamburoğlu et al corroborated this finding with chemical created lesions in mandibles, using 70% perchloric acid for 12-24 hours. Furthermore, in this last study, the authors declared that the lesions recreated chemically could potentially be more accurate in representing in vivo apical periodontitis lesions than bur holes.

The rationale was that bur holes produce exact borders, making them less clinically accurate and chemically created lesions have irregular border that more closely mimic endodontic lesions. CBCTs have been demonstrated to be a great tool for measuring different dimensions of structures of the oral cavity. Conventional radiography can have a degree of distortion of the images, making it difficult to use when determining measurements from the images. In 1979, Larheim and Eggen performed a study in which 50 teeth to be extracted were radiographed by paralleling technique and a preprinted intraoral radiographic film were taken. On the preprinted intraoral radiographic film, a measuring grid was conveyed to the film as a latent pattern by a stenciling process prior to the x-ray exposure. Lengths of teeth were read directly on the completed radiograph. At the time this technique was found to be more accurate than other clinical methods, but yet 5% of periapical radiographs showed an unknown degree of image enlargement. On the other hand, do not have this distortion problem. Kim et al found that CBCT was accurate in measuring distances between different anatomical structures. They examined twelve mandibles using CBCT and a Boley gauge and determined the distance between the root apex and the mandibular canal. They found that both methods were highly reproducible and accurate.

These findings would confirm that with CBCT, there is little to no distortion present, demonstrating a high level of accuracy. Linear measurements have also been found to be extremely accurate using CBCT. Different measurements have been taken using mandibles, including total height, distance between alveolar crest and inferior alveolar canal, thickness of the cortical bone, and thickness at the height of the superior bony crest. Suomalainen et al found, that with these measurements, there was no difference found between using the CBCT scan and the actual measurements using the gauge The high level of accuracy of CBCT technology provides a robust instrument for diagnosis in the field of endodontics. As shown by Velvart et al and others, the ability to accurately detect and measure the distance to the inferior alveolar nerve canal allows for a more predictable diagnosis and tool in preparation for apical surgeries and endodontic treatment. During endodontic treatment it could serve as a tool for measuring working lengths and obturation lengths, being more accurate than periapical radiographs Better yet, CBCT can have useful implications when evaluating and measuring structures as they are developing such as tooth germ volumes, pathologic developments and bone enlargement in periapical lesions after endodontic treatment has been completed. The information gathered from the CBCT is more accurate than that of periapical radiographs, therefore in endodontics, it would be useful when monitoring healing of areas with significant bone loss due to endodontic and non-endodontic pathology.