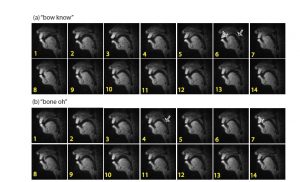 is a powerful non-invasive imaging modality, but is relatively slow compared to alternatives such as X-ray and ultrasound. Accelerating MRI scans has been of the great interest over the past several years and the acceleration of upper airway MRI, in particular, is a primary focus of this thesis. Rapid and real-time MRI can be used to capture tissue dynamics (e.g., the tongue/velum during speech, or the beating heart) or to reduce scan time. Rapid MRI can be achieved through the use of novel acquisition and reconstruction methods. Acquisition technologies such as echo-planar imaging and spiral imaging are e®ective at improving temporal resolution, but introduce additional image artifacts. Image reconstruction techniques such as parallel imaging and compressed sensing accelerate acquisition speed by highly undersampling Fourier data and improve image quality by removing spatial aliasing artifacts 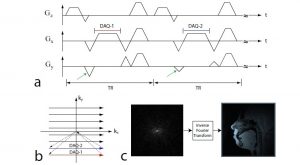 Here, I briefly introduce four fundamental k-space sampling schemes (i.e., 2DFT, projection reconstruction (PR), echo-planar, and spiral), each of which have their own characteristics and exhibit advantages/disadvantages depending on the applications. Some
representative k-space trajectories are illustrated in Fig. 2.3.
10Figure 2.2: Pulse sequence diagram and image formation process. (a) Basic 2DFT fast gradient echo (GRE) pulse sequence. DAQ represents data acquisition period during which the signal is recorded by the receive coil. Note that the blip size in the Gy gradient
(i.e., phase-encode gradient) changes by a certain increment in the area at every TR (seethe green arrows), enabling to acquire subsequent ky levels in the k-space shown in (b). (b) Data samples acquired during each DAQ period are mapped onto the k-space trajectory.(c)The inverse Fourier transform of the acquired k-space data yields the ¯ nal image.