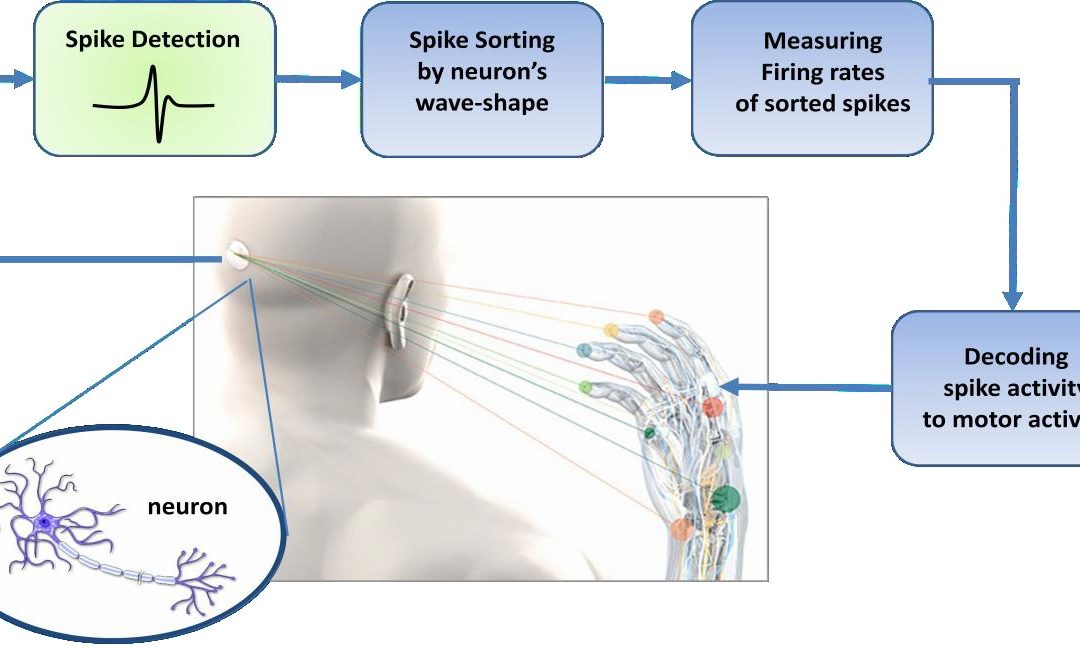 Information processing in the brain is carried out by large groups of interconnected neurons. Neurons are the cells responsible for encoding, transmitting, and integrating signals originating inside or outside the nervous system. The transmission of information within and between neurons involves changes in the resting membrane potential, when compared to the extracellular space. The inputs one neuron receives at the synapses from other neurons cause transient changes in its resting membrane potential, called postsynaptic potentials. These changes in potential are mediated by the flux of ions between the intracellular and extracellular space. The flux of ions is made possible through ion channels present in the membrane. The ion channels open or close depending on the membrane potential and on substances released by the neurons, namely neurotransmitters, which bind to receptors on the cell’s membrane and hyperpolarize or depolarize the cell. When the post synaptic potential reaches a threshold, the neuron produces an impulse. The impulses or spikes, called action potentials, are characterized by a certain amplitude and duration and are the units of information transmission at the interneuronal level.

The discovery of the neuron was a milestone in brain research and paved the way for modern neuroscience, but the brain is yet to yield the vast majority of its secrets. Current neuroscience research operates at two separate levels: The macro- and microscopic levels.
The macroscopic level uses imaging techniques like functional Magnetic Resonance Imaging (fMRI) and Magnetoencephalography (MEG) to measure regional changes in metabolism and blood flow associated with changes in brain activity. It captures whole brain activity patterns that allow the mapping of brain regions associated with a particular behavior or task. These techniques lack single-cell details and the requisite temporal resolution to permit detection of neuronal firing patterns.
The microscopic level is concerned with investigating how individual nerve cells work, studying their response to stimulation and monitoring the firing rates associated with a certain behavioral output, mental state or motor activity. This can be done using implanted electrodes to record the rates and timing of action potentials. The sparse sampling of neuronal activity monitoring tens to few hundreds of neurons does not give the global view of signaling in neural circuits that can involve millions of neurons. There is a gap between the two levels, that is believed to entail an answer to the question of how neuron cells collaborate to process information. To fill in the gap, we need a static anatomical map of the brain circuitry describing the synaptic connections within any given brain area, as well as a
dynamic map revealing the patterns and sequences of neuronal firing by all neurons over time scales on which behavioral outputs or mental states occur. Hence the aspiration is not only to map the “impenetrable jungle” that Cajal referred to but also to map the dynamical traffic within the jungle and analyze it. Research efforts are conducted to approach that ultimate goal, and along the hard path to achieve it, technological breakthroughs evolved and more are bound to arise. New technologies may include new optical techniques to image in 3D, new capabilities for storage and manipulation of massive data sets, new clinically viable

Focusing on the microscopic level, two of the research fields concerned with recordings of the spiking activity of neurons using microelectrode arrays are:
The Brain-Machine Interface (BMI) and brain in a dish research fields.

Extracting motor control signals from the firing patterns of populations of neurons and using these control signals to reproduce motor behaviors in artificial actuators are the key operations of a brain-machine interface. The typical neural signal processing pathway as shown in Fig.1.1 is designed to measure the instantaneous frequency of neural action potentials, or spikes. Since any given electrode may sense spikes from multiple neurons, it is typically necessary to sort all detected spikes by waveshape (i.e.by neuron). Firing rates of sorted spikes are typically measured by moving average; these rates can then be used by “decoding” algorithms which use statistical models to correlate spiking activity with behavioral or motor activity in the subject. 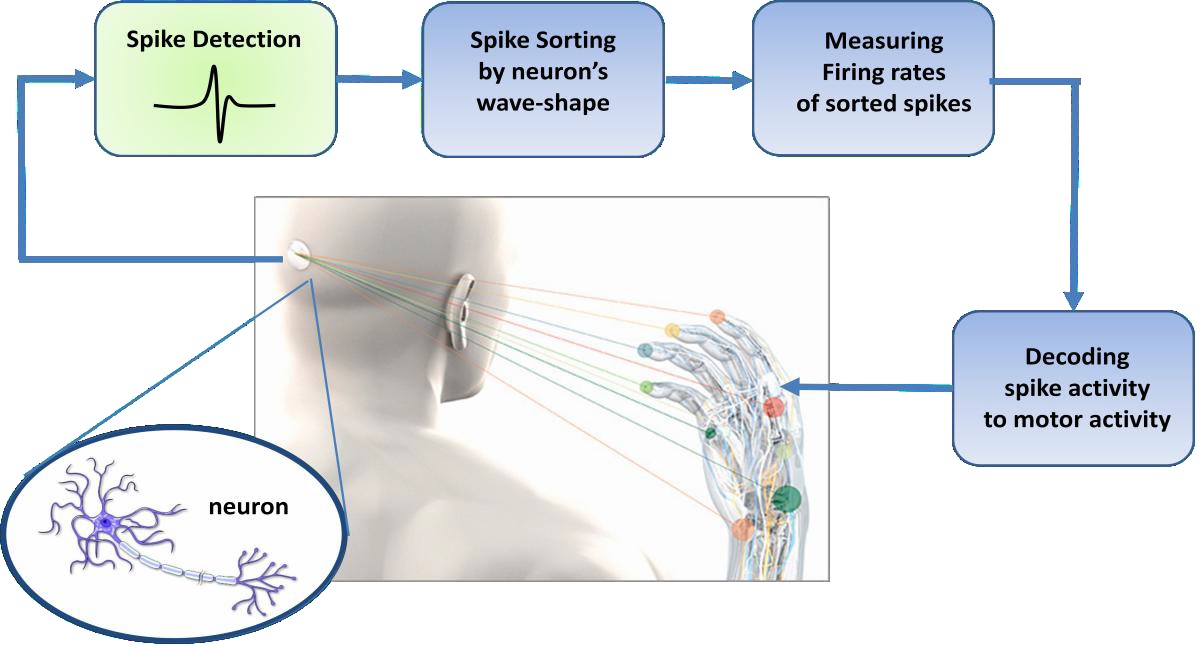 Hence invasive BMIs rely on the physiological property of individual cortical neurons to modulate their spiking activity in association with movements. These modulations are found to be highly variable from neuron to neuron and from trial to trial. Yet averaging across many trials reveals fairly consistent firing patterns. Based on the hypothesis that the function of neural circuits is an emergent property that arises from the coordinated activity of large numbers of neurons, this phenomenon can be explained. Individual neurons generally form synaptic connections with thousands of other neurons. In distributed circuits, the larger the connectivity matrix the greater the redundancy within the network. Given their distributed connections and their plasticity, neurons are likely to be subject to continuous dynamic rearrangement, participating at different times in different active ensembles. Accordingly both accuracy and reliability of predictions of motor activity improve considerably with increasing the number of simultaneously recorded neurons and decreasing the errors due to individual neuron firing variability. Pursuing this motivation, the number of simultaneously recorded neurons has been approximately doubling every 7 years since 1950’s. Standard recording techniques using 704 implantable micro wire arrays have been reported in literature. Recently Nicolelis Lab at Duke University announced their achievement to simultaneously record the electrical activity produced by a population of 1,874 interconnected single neurons at work in a primate.

Brain in a Dish:

At present, the prime methodology for studying neuronal extracellular activity under in vitro conditions is by using substrate-integrated microelectrode arrays (MEAs). This methodology permits simultaneous, long-term recordings (i.e. of up to several weeks) of extracellular field potentials. Correlating MEA recordings with microscopic imaging and stimulations is widely used to study the circuit-connectivity, dynamics and propagation effects in neuron assemblies. It is also used to investigate population coding, activity patterns, plasticity and pharmacological testing on either dissociated neuronal cultures or brain slices of embryonic rats, i.e. the young forests as Cajal described them. Commercially available MEA systems integrate typically 60–120 microelectrodes of 10–30 μm in diameter with pitches on the order of hundreds of micrometers. Typical neuron soma dimension in vertebrates is few micrometers long and the typical neuronal networks have 10000–50000 neurons, the limited number of electrodes and their rather large pitch results in a substantial spatial undersampling of the overall network activity as shown in Fig2.2.

The development of higher spatial and temporal resolution at low noise levels are prerequisites for opening the perspective to access the network electrical activity at the global and cell levels. Recently, CMOS-based high-density MEAs were developed featuring switching techniques to manage a large number of electrode channels interconnections, multiplexing, amplification, and filtering. Active Pixel Sensor based MEA platform providing 4096 microelectrodes at 21μm inter-electrode separation and 7.7KHz sampling rate has been documented. Considering the ultimate goal of Brain Activity Map, the current neuroscience in vivo and in vitro research states and the advancement of high density microelectrode arrays, the migration to monitoring thousands of recording channels at high temporal resolution is achievable.