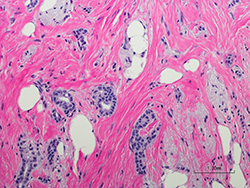 A concerted effort to reduce re-excision rates has produced an active interest in intraoperative margin status determination. A fast, accurate intraoperative method would allow surgeons to resect tissue while the patient is still on the table, preventing the need for a second surgery. The first and most intuitive intraoperative method is gross examination of the lumpectomy specimen by sight and palpation. Unfortunately, the most intuitive method is also the least effective, sporting a 44%  specificity (Sauter et al., 1994). Another method is frozen sectioning, in which a pathologist flashfreezes the specimen and creates a slide for immediate analysis. Slides from frozen sections are of poorer quality than their traditionally fixed counterparts, and the procedure, while fast, is also costly, with one article estimating the average cost to be $3123 per patient (Balch, Mithani, Simpson, &  Kelley, 2005).

The 2-dimensional specimen radiograph is another solution being explored. This technique, which is essentially a standard x-ray of the  excised tissue, is popular in wire-guided excision surgeries, where an x-ray is already 5 taken you ensure that the wire-labeled tissue is removed. The x-rays visualize both palpable and impalpable lesions due to the difference in radiodensity between tumor mass and the surrounding tissue. However, while the radiograph does well in identifying wire-labeled tissue (99% specificity) (Britton et al., 2011), it is far less reliable in determining margin status (Goldfeder, Davis, & Cullinan, 2006).
The lingering issue with specimen radiography is the effect of the orientation of the tissue on the final image. Cancer foci which appear  in one dimension may not appear in another, and foci which appear distant in one view may be closer to margins in other views.