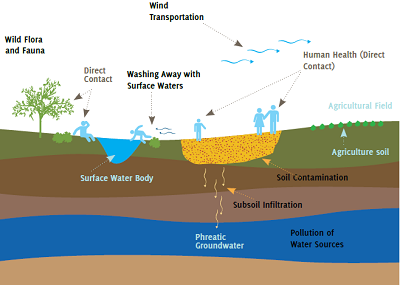 Mercury (Hg) is a natural element found in both organic and inorganic forms in the environment. It can enter the environment naturally, by re-emission, or from anthropogenic sources  is the most prevalent organic form of Hg and the most toxic form Human exposure to MeHg occurs mainly due to the consumption of contaminated fish and shellfish . Acute methylmercury poisoning in humans can lead to blurred vision, uncoordinated movements and muscle weakness, and impairments to hearing, taste, and smell . Low dose chronic methylmercury poisoning can lead to memory loss and an increased risk of neuro degenerative diseases, cardiovascular effects, and disrupted motor function . Prenatal exposure to MeHg is especially problematic, as it can cause mild to very serious problems with mental and motor development once the child is born. The San Diego River has previously been surveyed for Hg in fish tissue, but efforts have been sporadic and the most recent data available dates back to 1999 . Three reservoirs in the San Diego River watershed were surveyed for Hg in fish tissue during 2007 and 2008 for a statewide survey of lakes and reservoirs completed by the State Water Resources Control Board . During the follow-up statewide survey of rivers and streams, southern California was skipped almost completely, with the nearest sampling point, the Santa Ana River, over 90 miles away . Use of the river for recreational and subsistence fishing, combined with a lack of recent data regarding levels of Hg in fish from the San Diego River, has created a need for updated information.

Hg is an element found naturally in the environment in multiple forms. An odorless heavy metal, it appears as a shiny, silvery liquid at room temperature and forms an odorless, colorless, toxic gas when heated . Elemental Hg can transform into organic and inorganic Hg compounds including inorganic mercuric oxide, mercuric chloride, and mercuric sulfide. Mercuric sulfide, also called cinnabar ore, has been historically mined as the principal ore source of Hg, although most present day Hg needs are met through industrial reclamation and Hg stockpiles. Organic Hg compounds are formed when Hg combines with carbon. MeHg is the most prevalent organic form of Hg  as well as its most toxic form Hg enters the environment naturally, from anthropogenic sources, and from the reemission of previously deposited Hg from natural and anthropogenic sources. Hg vented from volcanoes or geothermal sources, from the natural weathering of rocks, and Hg evaporation from soil and water are considered natural sources . There are many anthropogenic sources of Hg including: burning coal and other fossil fuels; cement production; gold mining; iron and steel production; caustic soda production; battery production; waste incineration; and electrical instrument manufacturing . The emission of previously deposited Hg from natural or anthropogenic sources on plants and crops, land, and water surfaces, as well as Hg emitted from biomass burning are considered re-emission sources. It is estimated that fossil fuel combustion (coal and other fuels in stationary combustion facilities) represents about 10% of total global emissions annually.

Methylmercury in the Environment

Hg methylation in freshwater is primarily observed in lake sediments, wetlands, and floodplains. Once deposition of Hg (II) into surface waters has occurred, Hg readily adsorbs to particles in the water and can then settle into the sediment . In the sediments, it is primarily methylated by sulfur-reducing bacteria under anoxic conditions. This methylation of inorganic Hg to MeHg is the major source of MeHg in most aquatic ecosystems. MeHg is taken up by phytoplankton, which is then consumed by zooplantkton followed by foragers. Predatory fish consume the foragers, and top predators consume the predators and foragers  Bioaccumulation, or the build-up of substance in the tissues of an organism , occurs for individuals along the food chain. Biomagnification, defined as, the increasing concentration of a contaminant at successively higher trophic levels of the food web.  involves the transfer of these bioaccumulated substances from one trophic level to another. At each trophic level, MeHg becomes more concentrated, or “biomagnified”. Studies have shown that almost all Hg present in fish muscle tissue is MeHg , and human exposure MeHg occurs mainly due to the consumption of contaminated fish and shellfish .

The U.S. EPA defines human health risk assessment as:
The process to estimate the nature and probability of adverse health effects in humans who may be exposed to chemicals in contaminated environmental media, now or in the future.  Risk assessment can be used to answer important questions such as: What health problems could be caused by exposure to a certain chemical? What is the chance of experiencing health problems if exposed? What is a safe level and duration of exposure? U.S. EPA methods for conducting risk assessments follow guidelines initially established by the National Research Council Committee on Institutional Means for Assessment of Risks to Public Health in 1983 . Often called “the Red Book,” the 1983 publication of Risk Assessment in the Federal Government: Managing the Process was a groundbreaking report that still helped to shape risk assessment as it is known today. There are four basic steps to risk assessment, and these steps are recommended for carcinogenic as well as non-carcinogenic effects. The first step is hazard identification, which serves to identify what adverse health effects could be caused by exposure to a certain pollutant, whether the effects are likely to occur in humans, and how strong the evidence is for such effects . The second step is dose-response assessment, which describes the probability and severity of health effects at different exposure levels . The third step is exposure assessment, in which the actual dose of a chemical is estimated for a person or population over a specific time period . The final step is risk characterization, which gives an estimation of the overall risk of the occurrence of adverse health effects.