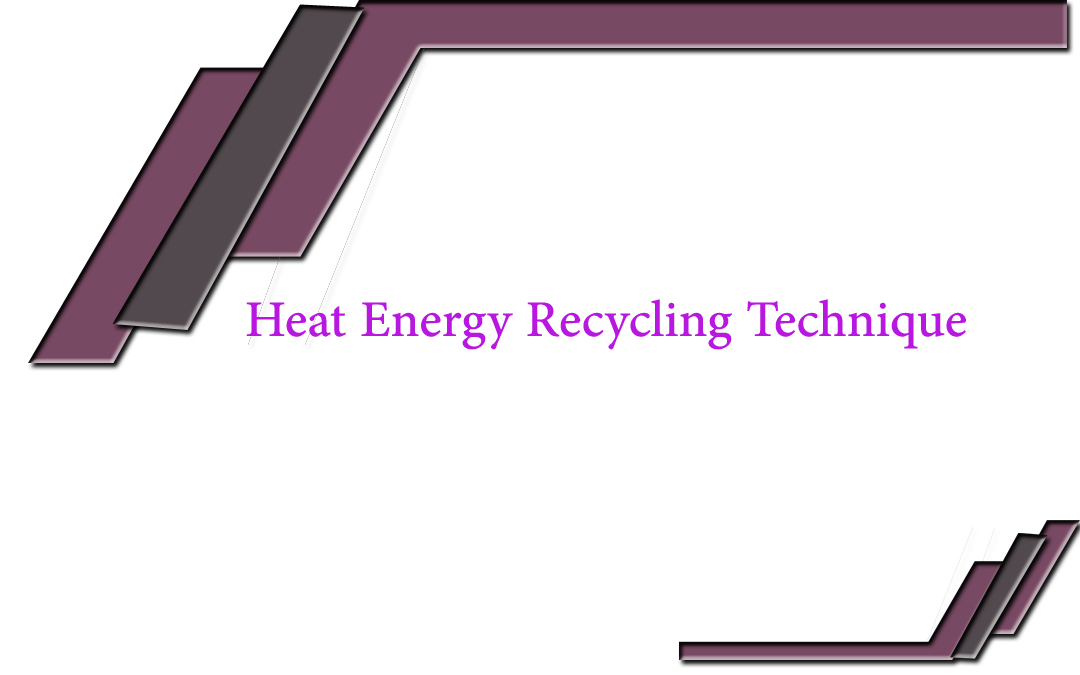 In this post, we talk about Heat Energy Recycling Technique.

Technologies using renewable energy are a relatively new concept with a huge potential to increase energy efficiency. In 2014, the statistics released by U.S. Energy Information and Administration showed that the renewable energy takes 9.1% of U.S. electricity generation . The powerful aspect of the renewable energy concept is converting wasteful energy by collecting and recycling. This process is called energy harvesting and energy scavenging. The energy harvesting is a way of collecting energy from the natural resources such as sunlight, wind, or water and from the waste or recyclable materials like biomass. On the other hand, the energy scavenging is collecting some residual or wasteful energy produced during some process.

Solar energy is one of the most popular and well-known examples of energy harvesting. Although it takes only 3% of the electricity generated, it is still a powerful and useful source of energy. Solar energy is divided into two types; light and heat. The Photovoltaic (PV devices) is normally used to collect sunlight and generate electricity. Heat is used in a passive way and in an active way. In a passive way, we can warm up space and save some heating energy in building by simply increasing the size of the window and adjusting the direction of the sunlight. In an active way, we use a direct heat/electricity conversion device, thermoelectric generator and cooler (TEG and TEC). The thermal/electric power plant uses the concentrated solar energy to heat the fluid to make indirect power generation in general. A newly developed solar thermal energy project uses the conversion technique to generate electricity directly from solar heat . However, the thermoelectric generator system using solar energy has some issues; the limited energy harvesting time and the inconsistent amount of energy over time due to the sunlight’s change in direction and intensity depending on the time and the weather condition.

Energy scavenging technique collects heat from anywhere other than solar energy. Heat can be collected from the physical activities like burning woods, running motors, vibration, or human activities. In general, heat is generated by mechanical energy or chemical energy and energy changes its format one to another. This basic principle allows us use the electricity production mechanism comprehensively. For instance, the major source of electricity generation is a stream turbine in U.S. and the stream of the fluid heat by the burning fuel. The large amount of heat energy produced through the mechanical process is converted to electricity . Thus, the industrial application of thermoelectric generator (TEG) is significant.

However, this same mechanism is not favorable in domestic applications although TEG attached to chimney or woodstove has been introduced in the past. The main reason of the failure was that the voltage generated by TEG in the domestic application was too low to be used. Nevertheless, the TEG application techniques become considerable over the years due to the advanced material science and the micro-sized device development. For example, a mini TEG was applied on wearable devices such as the wristwatch powered by TEG . The microwatt level energy produced by TEG is sufficient for the micro-sized device. The PowerPot project is one of the real life applications using TEG. Recently, the massive usage of USB charger like smart personal devices is introduced into our daily life. The portable charging system utilizing TEG and USB was useful and practical in the electricity unavailable environment such as outdoors.

The examples showed the TEG applied systems that generate various voltages and are used in various environments. We adopted the concept into the SLHC system design to develop a TEG indoor application. By testing the available TEG models, we evaluated the possibility of using TEG indoor application and reducing the extra power consumption in the control system by utilizing the device. We believe TEG technique can improve energy efficiency even more in heating if we can optimize the application design to collect residual heat efficiently in LHS.That was an explanation about Heat Energy Recycling Technique.