Fracture risk in AS

Osteoporosis has serious consequences, such as fractures. Fractures can cause severe pain, physical deformity, disability, poor quality of life and even mortality. In addition, they are sometimes associated with a need for long-term care assistance. Furthermore, fractures can be a huge financial burden to both patients and the health care system. Fragility fractures mainly occur at the spine in patients with AS. On the other hand, hip and other peripheral fractures have also been shown to occur though data in this regard is inconsistent. Spinal fractures occur commonly in patients with AS and are associated with significant morbidity and even mortality. Patients with AS have chronic back pain, stiffness and spinal immobility due to the disease. Sustaining a vertebral fracture is likely to worsen their back pain, stiffness and immobility. Vertebral fractures also cause hyperkyphosis and spinal deformities (Ralston 1990). For example, in a prospective study done at Glasgow, by Ralston et al in 1990, patients with compression fractures were found to have greater spinal deformity (defined by the distance from wall to tragus: 24.5 cm v 12.7 cm in controls) when compared to controls. In addition, patients with fractures also had less spinal mobility (20 vs. 45.6 degrees of flexion), and chest expansion (2 cm vs. 3cm in controls). Although mostly silent, acute vertebral fractures can cause back pain, but they can be missed in diagnosis as back pain and stiffness are common symptoms in AS and a separate cause for back pain is less often sought for (Ralston 1990, Feldtkeller 2006). In fact, some vertebral fractures are difficult to diagnose because of the atypical location of vertebral fractures in AS (Wang 2005). Not all spinal fractures that occur in AS occur at the typical osteoporotic sites such as lower thoracic spine (Campagna 2009, Westerveld 2009). Some fractures occur at the cervical spine, and involve the posterior arch structures of the vertebrae (Westerveld 2009). These fractures occur at the transvertebral or transdiscal sites and may even pass through syndesmophytes. Trabecular bone loss and paravertebral calcification increases the propensity to develop transvertebral fractures.
The atypical nature of these fractures leads to severe neurological involvement such as spinal cord lesions, nerve root injuries, and paravertebral hematomas and even high mortality (Westerveld 2009, Schoenfeld 2011, Sambrook 2012, Lu 2013). In addition, the fractures may heal defectively causing pseudoarthrosis and instability of the posterior arch of the vertebrae. In a systematic review conducted by Westerveld and colleagues that included 76 articles representing 345 patients with AS, found that most patients (n=227, 66%) sustained low energy trauma leading to their fractures. The most common mechanism of trauma was a fall from standing/sitting position. The sites of fractures were cervical, thoracic and lumbar spine (81.2%, 10.7% and 7.8% respectively). The rate of various complications occurring secondary to vertebral fractures was 51%. Even uncommon complications of spinal fractures such as aortic dissection, aortic pseudoaneurysm and tracheal rupture were reported (Westerveld 2009).The overall mortality within 3 months after fracture was 18% (Westerveld 2009).

Non vertebral fractures in AS

In a recent population based study from Sweden, patients with AS had a high risk for vertebral and non-vertebral fractures when compared to controls (123). Of 6,474 patients with AS, 218 (3.4%) suffered non-vertebral fractures, compared with 861 (2.7%) matched controls. The incidence of non-vertebral fractures were higher in patients than controls (8.27 (95% CI 7.24 to 9.44) per 1000 person-years vs. 6.83 (95% CI 6.39 to 7.30) in controls (Munoz Ortego 2014). The increased risk was independent of smoking, alcohol consumption, body mass index, and use of oral corticosteroids. However, the high risk was found only in those who were not being treated with NSAIDs despite the fact that patients who were treated with NSAIDs had more severe disease. Potential mechanisms by which NSAIDs may confer protection against vertebral fractures include delay in radiographic progression, reduction in spine rigidity, relief in back pain and stiffness and improvement in physical function (Haroon 2012, Poddubnyy 2012 and Kroon 2012). The results of the study by Muñoz-Ortego and colleagues are similar to that of another large population based study conducted by Weiss et al in Sweden which suggested a high risk of hip fractures in AS (Weiss 2010). The odds ratio for hip fracture was 2.5 (95% CI: 1.9-3.1). However, two studies have documented that the risk of non-vertebral fractures is not elevated in patients with AS (Vosse 2009, Cooper 1994). In 1994, a retrospective population-based study reported the incidence of non-vertebral fractures was similar to that of controls (Cooper 1994). No increase in the risk of limb fractures was observed despite a pronounced increase in the risk of thoracolumbar compression fractures (standardized morbidity ratio = 7.6; 95% CI, 4.3-12.6) after 2,398 person-years of observation in patients with AS. Likewise, a primary care-based nested case-control study of 231,778 patients with fracture, conducted in Netherlands showed that the risk of fractures of the forearm and hip was not significantly elevated in AS patients (n=758) with AS (OR 1.21; 95% CI 0.87-1.69 and OR 0.77; 95% CI 0.43 – 1.37, respectively) (Vosse D 2009). Hip fractures occur late in life and age of occurrence of hip fracture might be a reason why some observational studies did not find an association between AS and hip fractures despite the high prevalence of osteoporosis (Vosse D 2009, Cooper 1994). Most patients recruited in the above mentioned studies were young or middle aged. High risk of non-vertebral fractures could also be underestimated by improper study design, incorrect definition of fractures or a lack of statistical power due to small sample sizes. 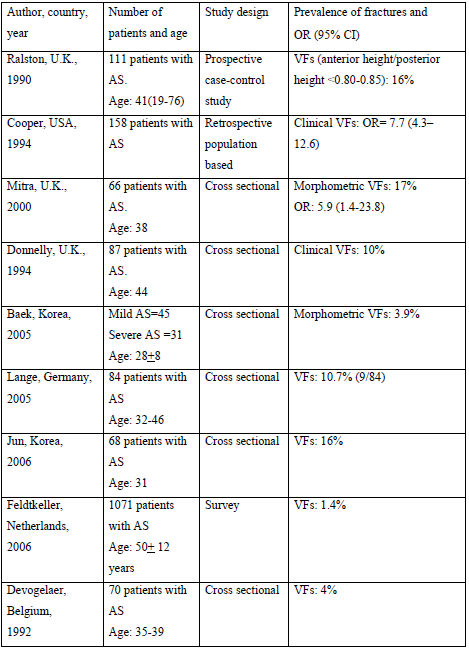 Table: 4: Summary of data on the prevalence and risk of fractures in patients with AS 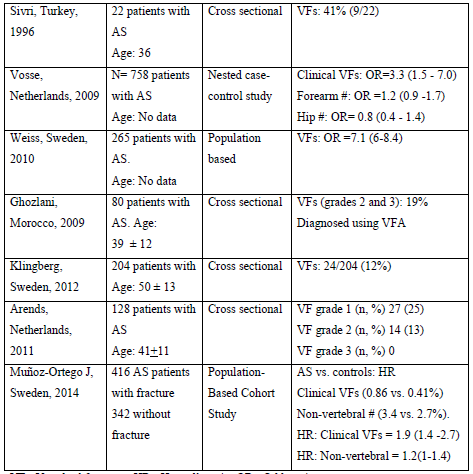 Table: 4: Summary of data on the prevalence and risk of fractures in patients with AS

Risk factors for fractures in AS

Fractures might occur in patients with AS due to several reasons. The most common risk factors for osteoporotic fractures in the general population include low BMD, older age, use of glucocorticosteroids, family history of hip fractures, and falls. Spinal fractures occur in AS due to mechanical causes or systemic bone loss. Patients with AS have mechanical risk factors such as spinal immobility, ankylosis and syndesmophytes of the spine predisposing them to develop vertebral fractures even with minimal trauma (Donnelly 1994). There is conclusive evidence that fracture risk is increased in patients with higher mSASSS suggesting that mechanical factors of the spine also play a role. In addition, patients with AS have high bone remodeling.
Vertebral bodies have high trabecular bone content and compromised trabecular structure in AS increases the risk of fractures (Akhter 2007). High remodeling compromises bone mineralization deteriorates structure of the collagen and also causes micro-damage to the bone. No data are available on the risk of falls in AS patients. Enough evidence now exists to suggest that fractures in AS are mainly predisposed by bone loss. Klinberg et al demonstrated that the occurrence of vertebral fractures in AS were associated with lower BMD of both the spine and hip. The strongest correlations between the Genant score and BMD were found in the hip followed by volumetric and lateral lumbar BMD.
Not all studies have shown that BMD of the lumbar spine or hip is a good predictor of vertebral fractures (Akhter 2007). In 1994, Donnelly and colleagues from United Kingdom analyzed the link between BMD and vertebral fractures in patients (9/87 patients had vertebral fractures) with AS (Akhter 2007). BMD at lumbar spine or femoral neck was not significantly reduced (spine Z = -0.31 vs. -0.18 for non -fracture group, p = 0.81, femur Z= -0.81 vs. -0.80, p = 0.97) in patients who had vertebral fractures. The study had some limitations, however.