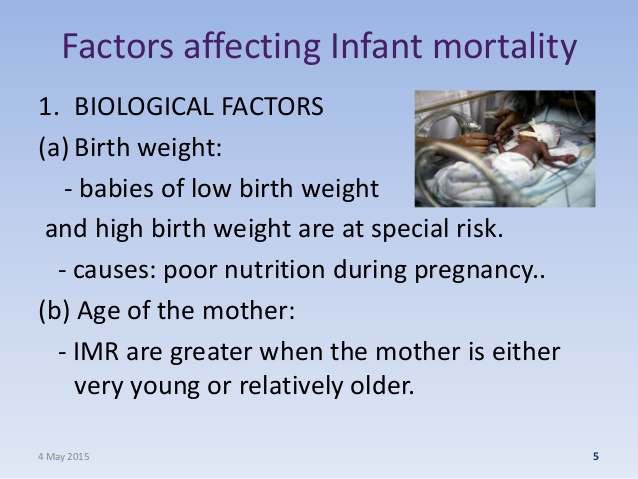 According to the World Health Organization, infant
mortality rate (IMR) is the number of child deaths that
occur before a child reaches the age of 1 year . Infant
mortality has been the main measure of quality of health
and population health in assessing the health outcomes of a
country .

Throughout the 21st Century, IMR rates in the UnitedStates have shown a significant improvement but, according
to research and data, there still exists a lack of progress .In spite of the high-income level of the United States, the IMR is substantially high, when compared to the IMR of other developed countries such as France, Japan, the United Kingdom, and so on . The United States has the highest mortality rate among infants, than all other industrialized countries combined . Pre-term births, low birth weight, and high-risk pregnancies are all associated with infant mortality, and are direct consequences related to the rising cost ofhealth care. Reports indicate that pre-term infants cost as much as 10 times more to care for, in comparison to full-term infants .

Toward A National Strategy on Infant Mortality

The Institute of Medicine’s (IOM) guidelines signify that there is an association between mortality of infants and gestational weight gain (GWG) and body mass index . A mother’s BMI and GWG are two of the main factors in assessing the survival rates of an infant. Women who are considered underweight oroverweight are prone to high-risk pregnancies . Mothers who were considered at risk of beingunder weight during pregnancy were prone to 6.18 the normal rate of infant mortality. Alternatively, women who were considered overweight were associated with a rate of 2.11 IMR . Women who were at the4 normal weight had the lowest IMR rate of 1.47. These were pre-determined standards established by the IOM .

Recently, there has been a surge in infants being born underweight or pre-term, and infants born under the normal birth-weight are prone to higher mortality, which in turn impacts the IMR . Pre-term birth is defined as birth before 37 weeks of completion . There are 12 pre-term births for every 100 live births in the United States. Pre-term births have severe consequences in health care spending, and are responsible for nearly $26 billion annually .Infants born between 37–39 weeks of conception are prone to higher mortality and diseases, and also liable for nearly $1 billion in hospital costs per annum . Pre-term infants are at risk of high mortality in comparison to mature births with a longer gestation period . These births may be a consequence of the mother having prenatal problems, or could also be unprompted with no contributing factors  Prenatal care may decrease the IMR with the increase in early recognition of obstetrical problems in pregnant women, to which the clinical answer is to induce a pre-term birth One the main factors associated with pre-term births is obesity, and risks related to gestation. Also, there is an increase in the uninsured female population, which decreases the chances of them receiving effective health care .

In the 2000, 34.6% of all infant deaths in the United States were associated with pre-term births, and this 7 number rose to 36.0% by 2007 . This can be related to the inclination of physician’s willingness to carry out a cesarean (C-section) delivery on mothers with a low gestational period  Research indicates that there is link between pre-term births and an increase in C-sections being performed . Infants born via C-section are prone to a high-risk mortality due to being born prematurely and having a low birth weight. In 15 years (1991-2006), the percentage of singleton births, born through a C- section, increased by nearly 48% for pre-term births and 38% for term births . The rate of cesareans being performed in the United States has grown over 50%, in the past decade, with a decline in vaginal birth following a prior C-section birth .

Women who have previously had a cesarean delivery are
at an increased risk of having a subsequent stillborn infant . A still-birth is the death of a fetus at 20 or more weeks of gestation. In the United States, 1 out of 160 pregnancies are subjected to still-births ; approximately 26,000 still-births occur annually, and are recorded under the nation’s IMR (accounting for nearly 1% of all live births) . The rate of still-births documented in the United States is higher than any other industrialized country .The rate of still-births among non-Hispanic African Americans is considerably high, at a rate of 11.1 stillbirths per 1,000 deliveries . According to research there are numerous factors that are associated with stillborninfants, such as: genetics of the parents, socioeconomic status, education, stress, access to health care, and diseases. An initiative to reduce the rate of stillborn births
was introduced by the Eunice Kennedy Shriver National
Institute of Child Health and Human Development.

Sudden Infant Death Syndrome (SIDS) is one of the
leading causes of death in the United States in infants aged 1 month to 1 year, and is the third main cause of infant mortality, congenital anomalies being the first followed by low gestation and low birth weight . SIDS can be defined as “the sudden death of an infant less than 1 year of age that cannot be explained after a thorough investigation is conducted, including a complete autopsy, examination of death scene, and review of clinical history . Pre-term birth is a contributing factor to SIDS. The Eunice Kennedy Shriver National Institute of Child Health and Human Development has partnered with other initiatives to bring awareness about the safe-sleep campaign to communities. The campaign contains three main messages:

(1) back-to-sleep for every sleep (2) roomsharing without bed sharing, and (3) keep soft objects and loose objects out of the infant crib . The back-to-sleep campaign was a confirmed success, yet 1 in 4 infants in the United States (almost 40% of non- Hispanic Black infants) are not placed on their back when sleeping. Infants who die due to accidental suffocation, strangulation in bed, and other sudden unexplained deaths have increased.