There are two types of nodes in a Wireless Sensor Network (WSN); normal-behaved and transfaulty. A normal-behaved node can sense all the surrounding data and send them successfully to its neighboring node. A transfaulty node may or may not be able to sense its surrounding data, and the transmission of the data collected to its neighboring node is either incorrect or null. 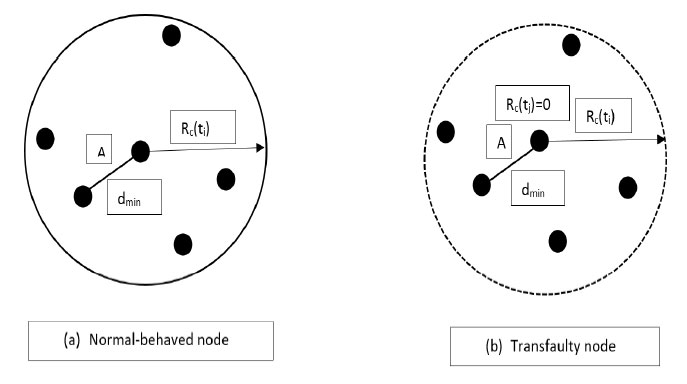 As shown in Figure 3, assume that the initial communication range of a sensor node is Rc(ti) at a time instant ti, and rc(t) is the communication range of the node at a time instant t. In an ideal situation, rc(t) is less than or equal to Rc; dmin is the distance from a node to its nearest active node. Each node in this sensor network works on the principle that Rc is greater than rc(ti), and rc(ti) is greater than dmin. If a temporary radiation event affects a WSN system, the affected sensor node fails to communicate to the neighboring node at tj as shown in Figure 3(b). Therefore, the communication range for that sensor is zero, and the originating node becomes temporarily transfaulty. The initial configuration of nodes before the radiation event is shown in Figure 4. The nodes are arranged in a random manner and are homogeneous in nature. Each sensor node has been assigned a Node ID, which is clearly shown in the figure. The sink node is purple and is the successor node of the sensor nodes.

A sensor node behaves normally when it can sense its physical surroundings and can send its sensed data to the neighboring node. The node becomes temporarily transfaulty when it may or may not be able to sense its surroundings and fails to communicate with the neighboring node. As soon as the transfaulty node regains favorable conditions, it reestablishes communication with its neighboring nodes. Figure 5 shows the sensor nodes that are capable of data transmission in a network. The data collected by the sensor nodes include environmental changes, such as the effects of radiation. When exposed to radiation, some of the nodes in the system remain active and some enter a sleep mode. The active nodes that remain able to communicate successfully with the sink node are shown in red, whereas the nodes that are in sleep mode are colored green.

In an effective WSN, the entire field of operations is covered by sensor nodes. Initially, a minimum number of these sensor nodes are activated, but if a radiation event occurs, a few of these active nodes fail to establish a strong communication range with neighboring nodes and become transfaulty. These transfaulty nodes create communication holes in the system, and the holes thus result in the loss of information.

FIGURE 6. Change of topology in the presence of radiation effects

In Figure 6, the dotted lines indicate the links connecting the sensors, which are affected by radiation. The solid lines indicate the links between the sensor nodes that are not affected by radiation. Due to the radiation effect, the holes shown are created, leading to information loss. Figures 7 shows that, under the effect of radiation on a Wireless Sensor Network, loss of data sensing or transmission takes place, this loss of data is represented in Figure 8 is in the form of small packet that is colored in black at the corner of the figure. This loss of data takes place due to the formations of holes in the system.

The radiation-affected area is shown with the help of black circles. The affected sensor nodes in the network are not able to transmit the data to the sink node, leading to loss of information in the form of a packet. Though the loss of information due to the hole formation in a system is troublesome, the complete removal of transfaulty nodes is not desirable, because it will reduce the lifetime of a network. Constructing a new topology by activating intermediate nodes of the transfaulty nodes is also not a desired solution, because intermediate nodes will not be able to communicate in the presence of radiation.

FIGURE 8. Loss of data in the form of a black packet.

In Figure 9, the cloud represents the radiation affected area, the black node is an active node, and its neighboring nodes are sleep nodes. As soon as the active node becomes transfaulty, it activates its immediate neighboring nodes, which will now function on its behalf. However, even these newly activated nodes may not function properly in the presence of radiation.

FIGURE 9. Change in behavior of nodes due to the effects of radiation.

To reduce the loss of information in the network, the method termed REDAST (Reliable and Efficient Data Acquisition in a stationary WSN in the presence of Transfaulty nodes) has been used, as described in a previous section in this report. The REDAST method will reconstruct the network topology during events triggering node isolation and network partitioning.