The production and appearance of the impressions is controlled by a number of variables including physical factors such as the amount of pressure applied while creating the impressions, the structure of the foot and presence of any lower extremity bone defect, height, weight and gait of the individual creating the impression. The environmental variables include the amount and composition of contaminant (e.g. blood, mud, dust) on the footwear outsole, prior to transfer to the receiving surface, the nature of the receiving surface (porosity, texture) and the humidity. During laboratory analysis, a trained footwear analyst may try to determine the brand, size, make and model of the footwear that could have possibly created the evidentiary impression and may also make attempts to locate manufacturing defects, wear of the outsole and accidental characteristics. Manufacturing defects are characteristics that have arisen in the footwear during production stages and are largely attributed as machine or mould related artifacts. These manufacturing defects, in addition to outsole size and design pattern are class characteristics, as they are shared by every footwear item generated from the same mould and hence are insufficient to uniquely identify a shoe, to the exclusion of all others. Wear characteristics, on the other hand, provide a better association between the impression and the footwear source. The gait of each individual is different and the unique features of each person’s gait sculpt their footwear, in individual and reproducible patterns. As a result, items of footwear, identical at the time of purchase will gradually take on the characteristics specific to an individual, as well as reflect the effects of the physical environments into which they step. These wear characteristics are critical to footwear impression analytical procedures and can reflect multiple factors of the wearer – occupation, body weight, habits, foot type. Accidental characteristics are non-reproducible cuts, tears or punctures that accumulate on the outsole as the shoe is worn. Although these characteristics are very similar to wear characteristics, they occur rarely. However. they may stand out as individualizing characteristics, i.e., details that could provide a strong degree of association. Along with evidence recovered from the crime scene, shoes from possible suspects are collected and submitted to crime laboratories for comparison. These shoes serve as a known form of evidence, as their source (the wearer) is often known. Reference impressions are created with the known footwear using ink and impression cards or transparency sheets. Photographs of the known evidence and reference impressions are collected for maintaining a permanent record. The impressions from the scene are then compared to the reference impressions by trained footwear examiners, using side-by-side comparisons or the superimposition method, An examiner has the ability to select from a range of techniques, to aid in the examination process. Adobe Photoshop®, special lighting, magnifying loops, low magnification, calipers etc, are available in most crime laboratories, to assist the examiner is determining length, width, tread design, surface characteristics and distortion of the evidence and reference impressions. The FBI, certain private consultants and state laboratories maintain databases of thousands of shoes or shoe impressions, with the aid of manufacturing companies. Footwear examiners may search these databases, in an effort to obtain information regarding the make, model, general characterstics and manufacturer details of a shoe and thereby try to obtain additional details about the evidence impressions or attempt to narrow down a shoe source by identifying any similarity between a database impression and the evidence impression. There exists no defined number of matching characteristics between the known and unknown impressions that are required to reach a particular conclusion. Hence the conclusions that an analyst may derive from analysis, includes varying degrees of association, such as probably made/did not make, could have made etc, to incorporate the variability in the quantitative aspect of the features of this kind of evidence. Considering the wide range of elements that need to be proficiently understood and applied during analysis, it is essential that these comparative examinations be conducted only by trained professionals with experience in the field. The International Association of Identification (IAI) – an organization dedicated to Forensic Comparative Science, ensures that this is accomplished by providing proficiency tests, certification exams, conducting annual meetings, providing lectures and constantly striving to augment this field and its practices. Through the efforts of the FBI and a few forensic organizations, the Scientific Working Group for Footwear and Tire tread examiners (SWGTREAD) was formed in 2004. This initiative was directed toward establishing an organization to standardize and advance forensic analysis of shoe print and tire tread evidence. In 2014, through the efforts of the National Institute of Standards and Technology and the Department of Justice, the Organization of Scientific Area Committees (OSAC) was established. The primary aim of this organization is to support the development and promulgation of forensic science standards and guidelines, and to ensure that a sufficient scientific basis exists for each discipline. In 2005, SWGTREAD published a set of standards and best practices, covering the areas of documentation, collection, examination and preservation of footwear evidence. The standards for documenting conclusions discourages the use of terms like “match” or “consistent with”, while interpreting impression evidence and instead prescribes 7 levels of conclusions that can be considered based on similarity or dissimilarity between observed characteristics (Table 1). 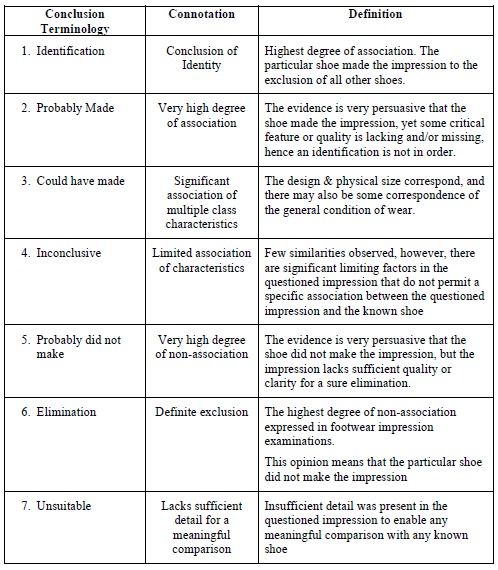