An Evaluation Of Carbon Concentrations 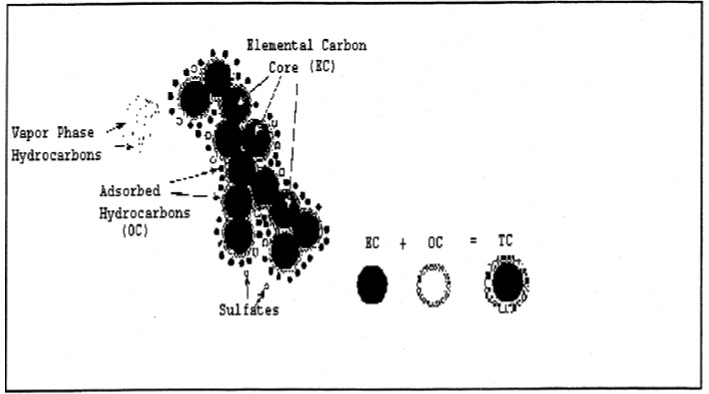 Diesel is one of the most common fuels used in the underground mining industry to power both support and production equipment. Though the use of diesel fuel has many advantages, it also has some disadvantages, especially with respect to underground mining.Several studies have shown that exposure to diesel particulate matter (DPM) in diesel exhaust (DE) can have adverse health effects. Based on evidence that DE increases the risk of lung cancer, The International Agency for Research on Cancer (IARC) classified it as a group 1
human carcinogen in June of 2012. Since diesel is so commonly used in the mining industry, many workers are exposed to these harmful effects. According to the Bureau of Labor Statistics, over 200,000 people are employed in the mining industry in the United States . Significant emphasis has been placed on the mitigation of DPM in underground mines in recent years in view of the risk of exposure to DPM of working personnel. The health effects associated with diesel engine exhaust particulate matter (PM) have been well documented. The U.S. Mine Safety and Health Administration (MSHA) has developed a total carbon air exposure limit as a surrogate for diesel exhaust constituents  in order to minimize exposure to PM. Various different technologies have been employed in the mining industry in an effort to comply with these exposure limits. The most common control technology is the installation of particulate filters on engines burning petroleum diesel or substitutes of petroleum diesel with a biodiesel fuel blend. Since biodiesel fuel blends typically
result in increased NOx emissions, a NOx catalyst is usually used to reduce NOx emissions

The health effects associated with diesel engine exhaust PM have gained considerable attention in the past two decades. DPM can result in both acute and chronic health effects depending on the dosage and length of exposure. Acute effects can include sensory irritations (potentially contributing to allergic responses) to the lungs, nose, throat and eyes as well as light headedness, nausea and induced asthma. Chronic health effects can include an increased risk of cardiovascular, respiratory, and cardiopulmonary diseases and lung cancer. The association of diesel exhausts with the development of lung cancer is the primary reason it has gained so much attention in the last few decades. Diesel exhaust was long suspected as a human carcinogen and was classified as a probable human carcinogen group 2A in 1988 by the IARC. After further investigation it was later classified as a group 1 human carcinogen in 2012 based on studies that revealed sufficient evidence that DE causes cancer in humans . The IARC classifies a class 1 carcinogen as : This category is used when there is sufficient evidence of carcinogenicity in humans. Exceptionally, an agent may be placed in this category when evidence of carcinogenicity in humans is less than sufficient but there is sufficient evidence of carcinogenicity in experimental animals and strong evidence in exposed humans that the agent acts through a relevant mechanism of carcinogenicity . The classification of DE as a human carcinogen has led to concerted efforts towards its release and propagation in occupational settings.

Diesel exhaust is a complex mixture of particles and gases that consist of several hundred different types of organic and inorganic components. Diesel exhaust consists of carbonaceous particles, oxides of nitrogen, carbon monoxide, aldehydes and other volatile organics . Particulate matter form diesel exhaust is comprised of hundreds of compounds adsorbed to the surface of the particles. These particles have an elemental carbon core that possesses numerous volatile organic and inorganic compounds (Figure 1). 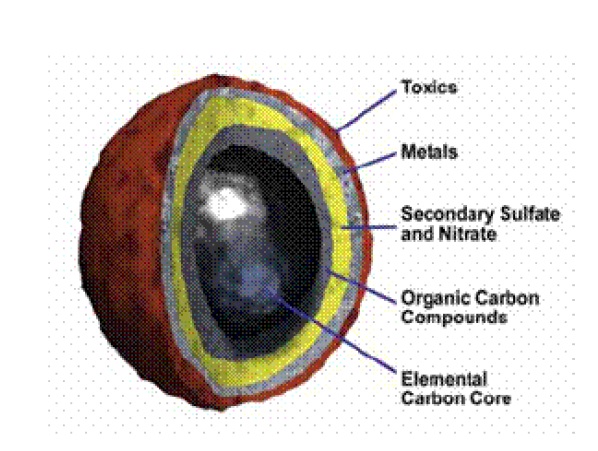 Since elemental and organic carbon constitute over 80% of particulate matter a lot of research has been conducted to evaluate elemental and organic carbon ratios in DPM and possible causes and effects of interferences while sampling. Studies have shown that EC/OC ratios differ depending on the operating phase of the engine. In startup and idle phases the OC emissions are generally higher than EC. However as the engine work up to full operating speed, the OC concentrations tends to decrease and the EC increase . Though EC will increase at higher engine operating outputs, studies have shown that OC concentrations are generally higher in total DPM .

Due to the wide use of diesel fuel used in the mining industry and the health effects associated with it, MSHA has prioritized the reduction of miner personal breathing zone (PBZ) exposures. In an effort to minimize exposure to diesel engine exhaust in underground mining environments, MSHA has developed an exposure limit which considers the total carbon (which is the sum of elemental and organic carbon concentrations) concentration in the air as a surrogate for diesel exhaust constituents . Total carbon was chosen as a surrogate because the sum of elemental and organic carbon components comprises over 80% of the particulate matter emitted by diesel . This is represented visually in Figure 2. MSHA uses 160 microgram per cubic meter (μg/m3) total carbon 8 hour time weighted average exposure limit .

Mining companies have employed various control technologies in an effort to comply with the exposure limits that have been set in place. These include replacing equipment or engines with newer, cleaner burning systems that reduce the amount of particulate matter released, installing pressurized, filtered cabs on equipment, and installing exhaust after-treatment devices on equipment. Other types of controls have included revising work and fleet practices to minimize worker exposures, increasing mine ventilation rates, and altering fuel composition, such as replacing petroleum diesel with biodiesel fuel blends.

Biodiesel is “the mono alkyl esters of long chain fatty acids derived from renewable lipid sources.” . Biodiesel can be derived from vegetable oils or animal fats. “Blend of biodiesel” is a term that refers to the ratio of biodiesel to petroleum diesel that is being used. For example, a B70 blend consists of 70% biodiesel and 30% petroleum diesel. Biodiesel had been around for a few decades but is now being widely used as a control for diesel because of the health effects associated with diesel exhaust. Since substitution of petroleum diesel with biodiesel fuel blends appears to be a promising control to reduce particulate matter, hydro carbon and carbon monoxide mass emissions , the use of biodiesel blends have recently gained popularity. However, biodiesel fuel blends have resulted in higher emissions of nano-sized particles, increased NOx emission, increased liquid PM concentrations, slight power loss and increased fuel consumption . PM reduction by biodiesel can be attributed to factors such as lower air–fuel ratios, higher fuel oxygen content and reduced aromatic content, which reduces carbonaceous soot . Biodiesel can be derived from several plant species, such as rapeseed (canola), soybean, castor, sunflower, etc. The origin of the fuel along with the percentage blended with petroleum diesel varies considerably.