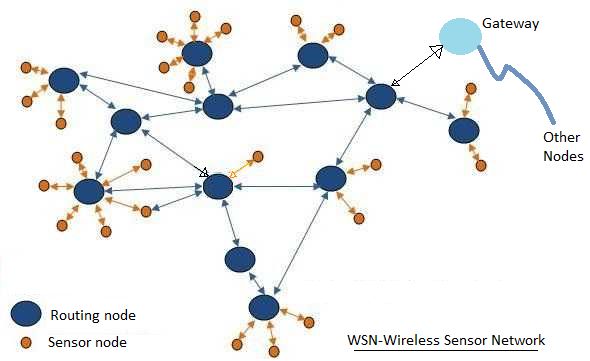 Wireless Sensor Networks (WSN) or more generally Wireless Sensor and Actuator Networks (WSAN), initially developed for military use, have become a popular technology, especially in applications where large number of low-power devices is necessary. Wireless sensors have been implemented at large scale domains such as surveillance, security and environmental monitoring. WSNs use dynamic spatial distributed autonomous sensors that constrain the resource nodes and energy in a system. Whether deployed randomly or strategically, sensor nodes can detect physical parameters such as temperature and pressure, and can send the collected data to the base station, using a single or multi-hop connection. External attacks by hackers and faults due to environmental factors, such as radiation, are significant challenges faced by sensor nodes in systems of Wireless Sensor Networks. There can be hundreds or thousands of nodes present in a WSN system. Each node is connected to either one or multiple sensors, and includes a microcontroller, an electronic circuit, a radio transceiver, and an energy source (battery). The size and cost of these sensor nodes varies and may affect other resources such as bandwidth, speed, memory, and energy. WSNs use a variety of topologies such as star networks or multi-hop wireless mesh networks. A typical architecture of Wireless Sensor Networks is shown in Figure 1. The cloud graphic represents the network area, which contains the sensors, and can be affected by radiation. Several nodes within the network area communicate data from one node to another and send data to the external source. The external source is typically a computer, which reads all the transmitted data. Transmission of data from the sensor nodes to the computer is facilitated by the sink node. 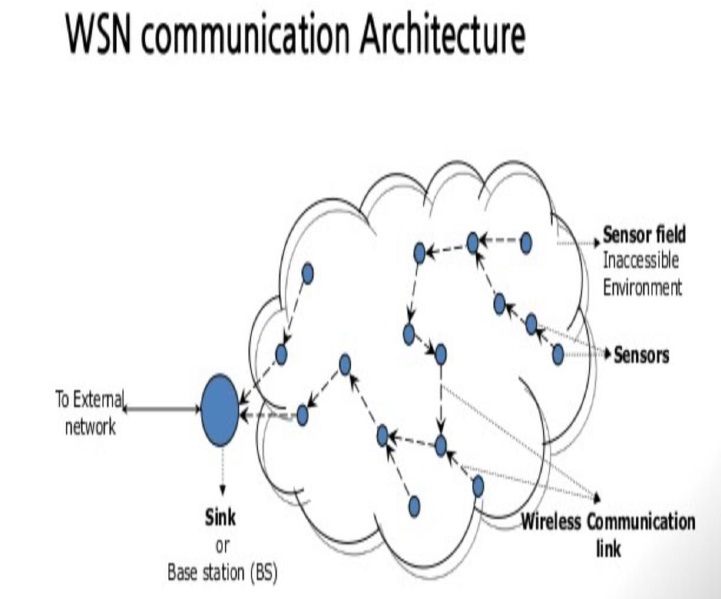 There are various applications in which WSN technology can be used, such as health care monitoring and area monitoring. In health care monitoring, sensors are deployed in portable devices that are worn or carried by patients, and can check periodically the values of several parameters of interest, such as vital signs and activity periodically. In area monitoring and environmental sensing, sensors can inform the military of intrusions across borders. WSNs in remote or harsh locations should be functional with a low power supply. Typical applications of WSN are presented in Figure 2.

If nodes or connections in a sensor network are faulty or do not communicate properly, data collection and storage can be hampered. To prevent this outcome, a method named Reliable and Efficient Data Acquisition in a Stationary WSN in the presence of Transfaulty nodes (REDAST) has been proposed by Pushpendu Kar and Sudip Misra in the literature review. Transfaulty nodes appear in WSNs when nodes can sense, but are unable to communicate with neighboring nodes, due to the effects of nuclear radiation or electromagnetic radiation. Dynamic holes are created in the WSN that can be temporary in nature, may increase or decrease in size, and can cause a loss of information in the system. If these faults appear in a WSN, the complete removal of transfaulty nodes is not recommended, because removal may affect the life expectancy of the system. Unattended and low power sensor networks are prone to attacks and faults. Thus, to improve the utility of these WSNs, a fault-tolerant system is desirable. The loss of information due to faults in a system degrades the performance of a network, but, in a fault-tolerant system the permanent removal of faulty nodes would not be necessary. REDAST provides a solution to salvage WSNs with transfaulty nodes, reduce holes, and prevent information loss, by including a sensor node that is compatible with a dual mode of communication.