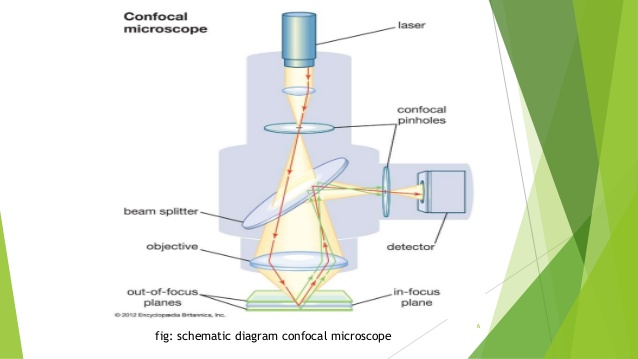 Confocal microscopy is an optical imaging technique that enables 3D imaging of thick tissue. The schematic of a confocal microscope is shown in Figure 1. A point light source is used to illuminate the specimen; signal from the specimen is detected by a pinhole detector. The confocal schematic, i.e., the use of point source and point detector, enhances lateral resolution and more importantly, leads to depth discrimination capability. The point detector is in conjugation with the point source which is imaged to a slice of the specimen (i.e. point A and point P are in conjugation). The pinhole detector effectively places a small “aperture” extremely close to the object. Therefore, the lateral resolution is determined by the size of the virtue aperture instead of diffraction. This also decreases the field of view to infinitely small. However, the field of view can achieve a required size through mechanically scanning the focused light spot. Figure 1 also demonstrates the optical sectioning capability. If light gets reflected from the focal plane of the objective lens, the point A will be projected to the plane P as point B, where the point detector lies; therefore the reflected signal will be detected. However, when light is not reflected from the focal plane of the objective, point A will has a blurred image at plane P. Due to the pinhole configuration, only the central part of light will be detected; and as a result the out-of-focus light is rejected 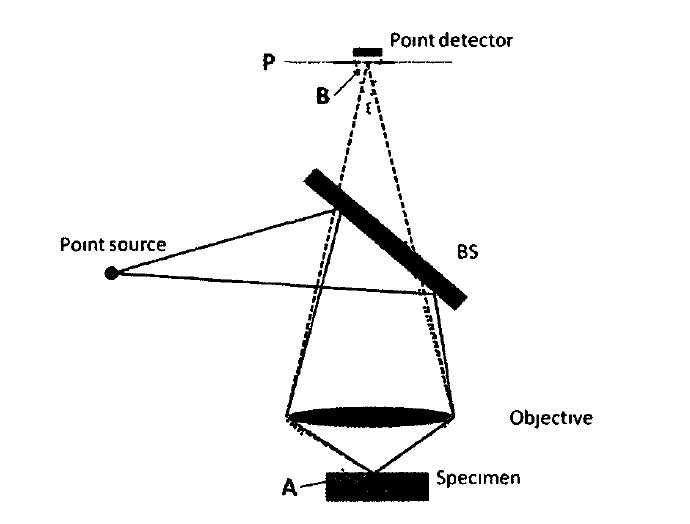