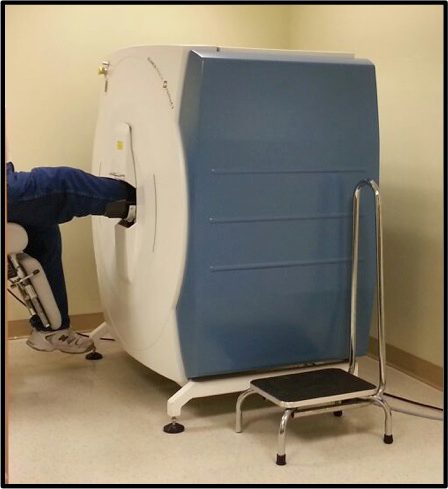 With the advances in medical imaging, it is now possible to determine bone microarchitecture and strength in a precise manner (Table 6 and 7). The novel technique called HRpQCT is now being widely used for studying bone strength and structure (Kalpakcioglu 2008, Cheung 2013).
Micro-CT (μCT) of ex vivo samples is a three dimensional imaging modality used for understanding and quantifying bone microarchitecture (Bouxsein 2008, Chappard 2011). 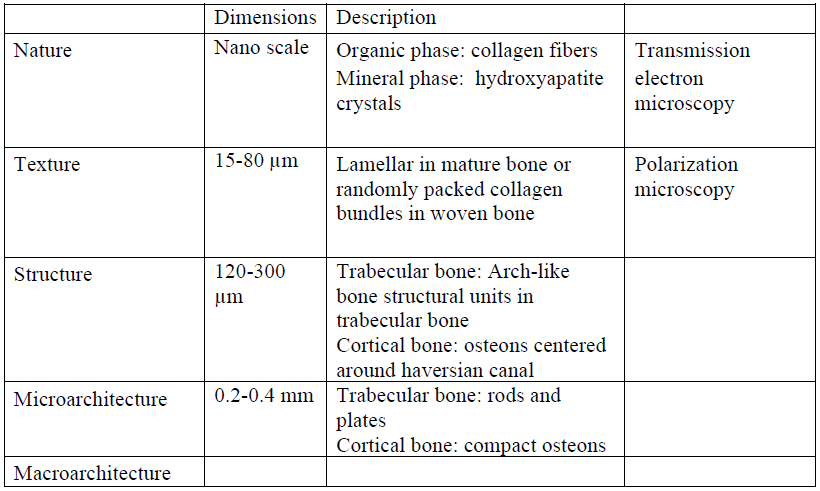 HRpQCT is a relatively new technique used to assess bone microarchitecture. Until recently bone biopsy was the only reliable method used to study microarchitecture of the bone. The main advantage of HRpQCT over bone biopsy is that it can be done non-invasively. The exposure to radiation from HRpQCT is < 3 μSv per scan and similar to that of DXA (MacNeil 2008). HRpQCT has certain advantages over DXA (Cheung 2013). It can measure both bone volume (bone mineral density) and structural properties. HRpQCT provides data on threedimensional bone structure and volumetric BMD as opposed to areal BMD obtained by twodimensional imaging by DXA. The HRpQCT has better resolution than DXA and provides detailed information about cortical and trabecular compartments (MacNeil 2008). Thus, it is possible to identify whether bone loss and fractures are occurring due to cortical thinning, porosity or loss of trabecular structure. Another advantage is that HRpQCT scans take shorter time to be completed because of the peripheral nature of the sites; radius and tibia (Figures 2 & 3).

Figure 2: HRpQCT scanner located at the Osteoporosis Program, Toronto General Hospital.
Shown here is how right tibia of the patient is being scanned.

The mechanical behavior of bone is a determinant of its fragility. Bone undergoes stress and strain when exposed to external forces. Bone stress is defined as the concentration of a mechanical force (Clarke 2008). Bone strain is the amount of physical deformation sustained when exposed to a mechanical force. Fractures occur when the stresses from an external force exceed the limit of the material strength of bone (Figure 4). Bone stress is mainly influenced by the bone geometry. It is now possible to estimate bone stress and strain non-invasively using HRpQCT (MacNeil 2008). A finite element analysis (FEA) of the HRpQCT images using special software helps to estimate the bone strength (MacNeil 2008). The FEA converts bone images to a dynamic three-dimensional computer model. The method was originally used in the manufacturing of industrial products. The three-dimensional models generated by FEA are a complex network of points joined together into a mesh. The distribution of points or nodes is based on the density of the underlying image. Areas with higher stress have larger number of nodes. The FEA images may be used to reconstruct models from data obtained from MRI, HRpQCT or MicroCT. It is possible to obtain multiple simulations. The main limitation of FEA is that the mathematical modeling as well as the assumption of element properties are isotropic and linear elastic with fixed Young’s modulus and so may not truly reflect the real world scenario.

Structural parameters assessed on HRpQCT and mechanical parameters estimated from FEA are related with fragility fractures. Vilayphiou and colleagues showed that bone structure, stiffness, and failure load were associated with fractures in postmenopausal women (Vilayphiou 2010). Similarly Graeff and colleagues demonstrated that structural and mechanical parameters of bone were superior to areal BMD in discriminating men with and without vertebral fractures (Graeff 2012). Even relatively small reductions in microarchitecture and strength can relate to fracture risk. Another study by Vilayphiou et al showed that HRpQCT and FEA parameters of radius and tibia predicted vertebral and non -vertebral fractures in men (Vilayphiou 2011). Volumetric BMD, cortical thickness, trabecular number, and separation were lower in cases than in controls, with differences ranging from -6% to 15%. The μFE-derived stiffness and failure load were 8% to 9% lower in those who had fractures.