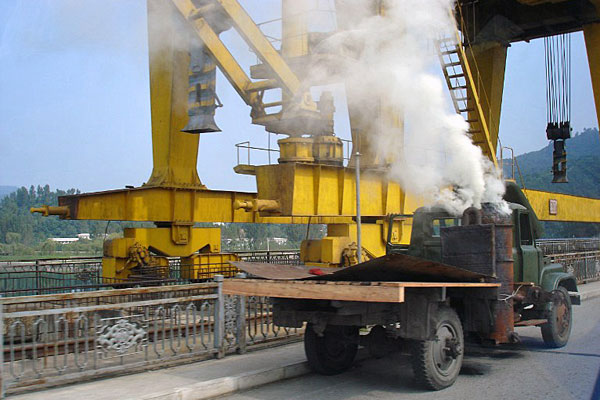 According to The Bureau of Labor Statistics 1,625,290 workers in the United States are employed as heavy and tractor-trailer truck drivers . Commercial truck driving is among occupations with potential exposure to high levels of diesel exhaust (DE) or diesel particulate matter (DPM). The list includes miners, construction workers, heavy equipment operators, bridge and tunnel workers, railroad workers, loading dock workers, farm workers, auto, truck and bus garage workers. While most Americans are subjected to unacceptable levels of DE, workers in these occupations experience much greater exposures . Long haul truck drivers (LHTD) spend many hours on the road and in truck stops where they take their rest breaks.

DPM contains EC, OC, and small amounts of sulfate, nitrate, metals, trace elements, water, and unidentified compounds. A typical composition has 25-60% of EC, with estimates ranging from 5 to 90% and 20-50% of OC of total mass. Sulfate and nitrate may account for up to 12% and 4%, respectively, of total mass . Polyaromatic hydrocarbons generally constitute less than 1% of the DPM mass. Metal compounds and other elements in the fuel and engine lubrication oil are exhausted as ash and typically make up 1%-5% of the DPM mass (EPA, 2002).The OC portion of DPM originates from unburned fuel, engine lubrication oil, and low levels of partial combustion and pyrolysis products. The EC part of DPM is formed by the pyrolysis (removal of hydrogen) of partially burned fuel at temperatures above 1,300 K . DPM consists of particles with a diameter <2.5μm (fine particles), as well as a subgroup with a large number of ultrafine particles (particles with a diameter <0.1μm). These fine particles are highly respirable which makes them a major health concern. Gaseous components of DE include carbon dioxide, oxygen, nitrogen, water vapor, carbon monoxide, nitrogen compounds, sulfur compounds, and numerous low-molecular-weight hydrocarbons. Many of the organic compounds present on the particle and in the gases are individually known to have mutagenic and carcinogenic properties .Toxicologically relevant constituents are the aldehydes (e.g. formaldehyde, acetaldehyde, acrolein), benzene, 1,3-butadiene, and polycyclic aromatic hydrocarbons (PAHs) and nitro-PAHs.

PM2.5 is particulate matter with an aerodynamic mass median diameter less than or equal to a nominal 2.5μm. Airborne particulate matter represents a complex mixture of organic and inorganic substances. Sources of fine particles include all types of combustion activities (motor vehicles, power plants, wood burning, etc.) and certain industrial processes. Common chemical constituents of PM include sulfates, nitrates, ammonium, other inorganic ions such as ions of sodium, potassium, calcium, magnesium and chloride, organic and elemental carbon, crustal material, particle-bound water, PAHs and metals . It should be noted that the list contains some of the same constituents that make up DE. Also referred to as “fine” particles, PM2.5 is believed to pose the largest health risks. Because of their small size (less than one-seventh the average width of a human hair), fine particles can lodge deeply into the lungs where they can cause short and long term respiratory and cardiovascular morbidity (WHO,2000). PM2.5 is one of the 6 criteria pollutants regulated by the EPA’s National Ambient Air Quality Standards (NAAQS). The other 5 are ground-level ozone, carbon monoxide, sulfur oxides, nitrogen oxides, and lead.

OSHA does not have a PEL for diesel exhaust particulates nor does NIOSH have a REL. The American Conference of Governmental Industrial Hygienists , proposed a recommended workplace exposure limit of 20 μg/m3. . The only occupational exposure limit available is the Mining Safety and Health Administration (MSHA) permissible exposure limit for TC which is 160 μg/m3. MSHA does not use EC as a surrogate because there is insufficient evidence for an appropriate conversion factor . The EPA’s inhalation Reference Concentration, which estimates a safe daily exposure level during a lifetime, is 5 μg/m3 for diesel exhaust particulates. Based on the risk assessment performed by Cal/EPA’s Office of Environmental Health Hazard Assessment, exposure to 2μg/m3 of diesel particles over a working lifetime would create an excess lung cancer risk of one in a thousand, which is often used as an upper limit of acceptable workplace risk. In Europe, a method similar to the NIOSH method is used to measure elemental and organic carbon. In German tunneling, for example, elemental carbon is used as a measure of exposure to DPM and it is limited to 100 μg/m3.

Description of the Occupation

Most tractor-trailer drivers are long-haul drivers and operate trucks with a gross vehicle weight (GVW) capacity of more than 26,000 pounds. These drivers deliver goods over intercity routes, sometimes spanning several states. As such these workers may spend up to 3 weeks at a time away from home. When not driving, their trucks serve as mobile homes parked at truck stops and rest areas along the highways where these drivers take rest breaks. In addition to constant exposure to vehicular air toxicants, LHTDs are disproportionately represented in statistics for highway crashes.